JORGE MICHEL GRAU, “WE ARE WHAT WE ARE” 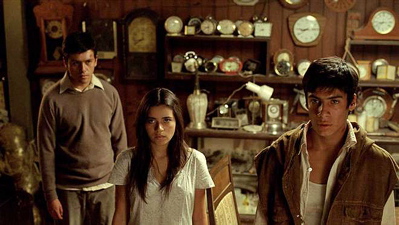 by Brandon Harris
in Director Interviews
on Feb 16, 2011 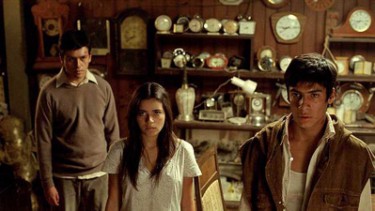 In We Are What We Are, first time Mexican helmer Jorge Michel Grau creates a deeply unsettling portrait of contemporary Mexican urban life which steady grows into many things all at once: a sincere family drama, an earnest exploration of the moral implications of cannibalism and a ribald satire of the seemingly intractable political and economic corruption that is haunting present day Mexico. All moody nighttime vistas and grim, claustrophobic interiors, Grau’s film manages both social commentary and grisly, bone-chilling terror the old-fashioned way, but it still manages to have a depth of human feeling that isn’t the stock and trade of this type of genre fare.

A graduate of Mexico’s state-operated Centro de Capacitacion Cinematographica, Grau worked as a producer and production manager on Mexican features, documentaries and education programs for television before his directorial breakthrough. We Are What We Are bowed at last year Director’s Fortnight in Cannes before premiering stateside at last fall’s New York Film Festival. It opens domestically from IFC this friday. 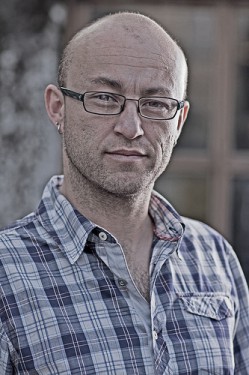 “We Are What We Are” director Jorge Michel Grau

Filmmaker: Your film builds very gradually, with a sort of slow burn rhythm that is popular on the festival circuit, but still somewhat unusual for the horror genre. How would you describe your approach to and inspirations from the universe of horror films?

Grau: I grew up watching horror films. What I wanted to deal with in this film was the disintegration of a family within a framework borrowed from the horror genres, but actually this is the experience of living in Mexico City. You can be living inside your home and outside of you; you’re surrounded by a situation that’s pretty much like that of a horror film. There are quite a number of cinematic references within the film to the genre of horror films or a cinema of violence,because that’s what I’m interested in. One of the obvious references in the film is to Guillermo Del Toro’s first film Cronos. That’s my approach to horror films, that’s the why I choose to shoot the film the way I did.

Filmmaker: Your depiction of  corruption on all levels and within seemingly every institution of Mexico City life is quite striking. From the family to the police to the streets, no one seems to be untouched by a sense of collapse, by a loss of civic mindedness and social integrity.

Grau: What I want to talk about by looking at the disintegration of the family structure is to also talk about how tribal structures have become a form of survival for people in Mexico. Whether you belong to the police force or a tribe of prostitutes or the tribe of the family, it’s sort of a necessary way to get by in Mexico City. In that same process, I wanted to observe how that same process leads to those same tribes preying on each other in order to make it, in order to survive.

Mexico is on the verge of an abyss. Authority has eroded, we have this very brutal drug war, and people have a sense of the country drifting because of the violence and lack of control. That’s one thing people get out of the film, that there’s a social commentary aspect to it. You get the sense that the police force is preying upon the rest of society, but even within that tribe of the police force, the members are preying upon one another within it. That part of what I wanted to convey about what’s happening in Mexican society today.

Filmmaker: The film is at once a deadly serious film about cannibalism, which you play straight, never for easy laughs, and yet it has these wonderfully conceived parodic elements concerning the larger societal malaise in Mexico. Was that a hard balance to find in both the writing and the directing of the picture?

Grau: I wanted to underline the realism of the film so that when viewers would watch the film they’d say, “those are cannibals,” but also “this is a family trying to survive.” I wanted the story of cannibalism to be very serious and dramatic so that people would say, “Well, that’s the way it is.” That part of the story was so serious that I wanted to give it breathing space to the viewer by coming up with some of these comical situations, whether it’s the situation in the morgue or the relationship of the police officers. In Mexico we have a habit of making fun out of tragedy, so that at first people are suffering but then two weeks later there are 200 jokes about whatever tragic situation occurred. I devised in it a way so that the Mexican audience could identify; this sort of cultural identity of Mexicans would be reflected in the film. As the story is told, I wanted to them to encounter very serious situations and follow that with something that would make them laugh and then really hit them with something very strong so that they would suddenly feel a complete void following those drastic shifts.

Filmmaker: What’s the financing situation for a film like this? Are Mexican cannibalism movies a hard sale?

Grau: This film was made thanks to a program in the film school that helps first-time filmmakers make a film. There’s a prize of $700,000. I decided to participate in the contest because I was sure no one else would give me the money to make this film. The conditions for earning the prize was that neither the producer, director or cameraman would have previously worked on a feature film and the director of the film was not to earn any money, get a salary, get paid. That’s how this film was made. The film belongs the the film school.

Filmmaker: How did go about casting this family? They are both terrifying, monsters really, but also completely plausible as a struggling, working class Mexican family.

Grau: The only rule I set upon myself was to find actors who were about the age of the characters. The first actor I found was Francisco Barreiro, the protagonist of the film. I did some casting with Francisco present. I wasn’t so much interested in the look of the actors as I was the dynamic that was created by their interaction. Paulina Gaitan showed up for one of the castings and through Paulina I met the late Alan Chavez, who recently died after finishing the film. The three of them became very good friends. They had superb chemistry. That helped me enormously in working with them. Once I had the three kids, I went to look for an actress to play the mother and many actresses rejected the project, but I was lucky enough to find Carmen Beato and she fell in love with the project.

Once I had the actors, I sent them to morgues to see autopsies, to learn how instruments are used to break people’s bones. Then a week before shooting began, we locked ourselves away in room about the size of this one to generate that feeling of claustrophobia.

Filmmaker: Did you keep them there the whole week?

Grau: Yes, I was with them for an entire week.

Filmmaker: What did you do with them?

Grau: I wanted to generate a bond with them and among them, but I also wanted them to feel completely isolated from the rest of the world. By living together in a space where they had to eat together, go to the bathroom together, it can generate with the utter lack of privacy, a certain friction and hatred among them, so that then they could be able to live the experience of the characters, who love each other intensely but greatly desire to escape one another and remove themselves from the family structure.

Filmmaker: Was that difficult for them?

Grau: Yes is it was difficult for them. They got along very well at the beginning. That’s when they were only seeing each other at rehearsals. Once they started living together, tensions began to emerge. They realized that they didn’t actually like each other as much as they had originally thought. That’s what I wanted. To get that sense of hatred and dislike for each other out of each of them as the characters.

Filmmaker: What were the circumstances of Alan’s death?

Grau: He was killed by the police.

Grau: [It happened] about two months after we completed shooting. His identity in real life was similar to that of the character in the film — he was abandoned by his mother, he had no father, he had no education beyond high school and had been living alone since age sixteen. He had been making money as an actor, but he was living out of control. He surrounded himself with people who were not good for his well being. He had this altercation with the police and was killed.

Filmmaker: Did he get a chance to see the film before he died?

Grau: He was an actor with enormous potential. In his short life he made nine movies and in that short time was twice nominated for Mexico’s equivalent to the Oscars. He was a revelation as an actor. I enjoyed enormously working with him. I sensed his potential, but I also sensed that his life was out of control. I tried to help him get his life together, I had the sense that his life was out of control and I wanted to put him to work on my next movie. I didn’t manage to help him in the end. He turned eighteen during production.

Filmmaker: Do you plan to revisit the horror genre?

Grau: Given the chance, I’d happy to make another horror film. Representation of violence fascinates me and the horror film is a site in which one can explore that.