Palm Springs International Film Festival, Peter Weir, Solitar Man, The Housemaid, The Myth of the American Sleepover, The Social Network, The Way Back, The Whistleblower 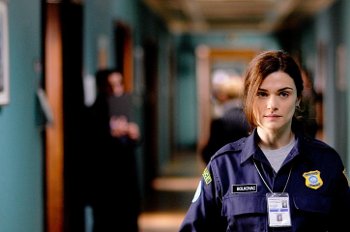 Palm Springs, jewel of the desert, playground of the Hollywood rich, not to mention thousands of prosperous retirees who enjoy golf, tennis, and dinner at five, is also the home of a pretty cool film festival, started by Sonny Bono in 1990. Once, it was a sleepy little affair where audiences could see multiple films in the same theater on the same ticket, and no one paid much attention to the results.

Those days are emphatically over. Wrapping its 22nd year on January 17, the Festival broke its own attendance record in 2011, as more than 130,000 cinephiles crowded into theaters. Hollywood noticed. A front-page article in the Palm Springs Desert Sun ran a leading quote from Daily Variety’s editorial director, Peter Bart, who opined that “in many ways PSIFF has become more important than Sundance, which is ‘more like a marketplace.’”

“Every festival has that moment when it all comes together, when everything is clicking on all cylinders,” said PSFF executive director Darryl MacDonald. “This was our year.” MacDonald himself wouldn’t go nearly as far as to say Palm Springs had eclipsed Sundance in terms of prestige, but he did call this year a “quantum leap forward” in terms of worldwide recognition. He attributed the spike in attendance to the increased number of filmmakers and stars, who came out not only for the Festival’s annual Black Tie Awards Gala, but for special event programs. Javier Bardem and Colin Firth discussed their craft in the Talking Pictures series; Michael Douglas emerged from his months-long battle against cancer to make a rapturously received public appearance before a screening of Solitary Man, and Ryan O’Neal and Tatum O’Neal chatted with the audience and signed autographs before a closing night special screening of their beloved 1973 film, Paper Moon. Actors honored at the Gala included Natalie Portman, Firth, Robert Duvall, and the entire cast of The Social Network.

A major part of Palm Spring’s appeal, in addition to the balmy January weather and the hulking San Jacinto Mountains ringing the city, is that it’s a laid-back place that caters to filmgoers, not dealmakers.

“We are audience-driven,” admits MacDonald. “We’re not a marketplace like Sundance, and we’re not a glamour fest like Cannes, where you can’t even get a ticket to a screening.”

And those audiences are driven by an insatiable lust for foreign films, which define this Festival’s niche: 205 films from 69 countries unspooled, including 41 of the 65 foreign language entries for this year’s Academy Awards. Not much was said about the Opening Night film, the Catherine Deneuve-Gerard Depardieu starrer Potiche, but the French fared better with Of Gods And Men, which won the FIPRESCI Award for Best Foreign Language Film.

I missed that film, not to mention at least a dozen others with Oscars buzz. But some of the best discoveries at Palm Springs come with films that fly under the radar. Saturday morning kicked off with Among Us, a lyrical Swedish offering which explores questions of faith of a different kind. Happy suburban couple Ernst and Cecilia (Michael Nyqvist and Izabella Scorupco) have their lives upended when their son falls into a coma after a playground accident. As hope dwindles, a mysterious stranger (Tcheky Karyo) shows up in town wanting to help, and offering the kind of magical assistance that can only come from people sent from the beyond. There’s more than a passing nod here to Wim Wenders’ Wings of Desire (and its US remake, City of Angels), except that the focus here is on the couple’s diametrically opposed views on faith. Cecilia embraces Walter immediately, clutching at any strand of hope, while Ernst, representing the atheism pervasive in his countrymen, rejects Walter on sight. In the capable hands of director Johan Brisinger, Among Us proved haunting and restrained, at least until its predictably uplifting end.

In an ominous note of just how crowded things had become by the final weekend, a young Festival volunteer chased me up to my seat reminding me, in future, to make sure I had my “queue card” when trying to get into films; simply flashing my media badge (as I had done in previous years) wouldn’t do. Queue cards are handed out in the passholders line, but if the passholder allotment is reached, you get pushed to a Rush line, where you have to wait till all the regular ticket holders — those sweltering masses who line up for certain films as much as two hours in advance — get in. Two-hour advance lines? At Palm Springs? Unheard of, but then so was the next thing that happened: for the first time in my five visits to the Festival, I got shut out of a screening. You expect to this to happen with the latest offering from a European master, but this was Chad’s entry, A Screaming Man, from acclaimed African director Mahamat-Saleh Haroun. If movies from Chad are selling out at your film festival, something is working.

Instead, I consoled myself with a U.S. indie, The Myth of the American Sleepover, a winning, low-key comedy about high schoolers in suburban Detroit on the last weekend of summer. It was refreshing to see a film about teens who aren’t foul-mouthed, raunchy, or hipsters snapping off the latest pop-culture references and insulting every adult in sight. The film intercuts between four storylines (one of them a girls’ sleepover) and treats all the expected teen subjects — sexual awakening, love, lust, rejection, and the awkwardness of adolescence — in surprisingly insightful ways.

On the edgier side, there was the low-budget British black comedy The Drummond Will, a pitch-perfect farce, directed by Alan Butterworth in the black-and-white style of the Ealing comedies of the ’30s (the film’s obvious inspiration), about two mismatched brothers (Mark Oosterveen, Phillip James) who come together for the funeral of their father, from whom both have been seriously estranged. The brothers assume that Dad has been indigent all these years, but when they find an old pensioner locked in a closet with a bag of money, that perspective changes in a hurry. As the body count piles up in the small village, so do the laughs, and Butterworth keeps the action moving with dazzling edits, surprise twists, and first-rate performances by his beleaguered leads.

The Housemaid, from South Korean director Im Sang-soo, is a ravishingly shot, over-the-top psycho-sexual thriller about a nanny, Eun-yi (Jeon Do-yeon) who embarks on a torrid affair with the wealthy husband of the wife she’s tending to. When their tryst results in a pregnancy, all hell breaks loose, as the women of the house — including the vengeful wife, her ruthless mother, and Mrs. Cho, the embittered housekeeper (Youn Yuh-jung, in a great performance) — lay traps to destroy her. I found it hard to warm up to anyone except Mrs. Cho, the true conscience of the film, who conveys a lifetime of subjugation at the hands of morally bankrupt employers.

It’s been seven years since Peter Weir’s last film, Master and Commander, and the great Australian director showed up at Palm Springs with his much anticipated new film, The Way Back. Starring Ed Harris, Colin Farrell and Jim Sturgess, it’s an epic tale, based on The Long Walk, a memoir by Polish writer Slavomir Rawicz that may be more fiction than fact. Nevertheless, it’s a gripping story about a group of prisoners who break out of a Soviet gulag in 1940 and walk 4000 miles, through the Serbian snow, across the Mongolian desert, and eventually across the Great Wall of China and into India. I got blisters just watching it. As the tagline says, “their escape was only the beginning,” and the group endures the most brutal obstacles nature can throw at them. Farrell brings his In Bruges persona to his role as a charismatic Russian criminal; Harris is dependable as the lone (stoic) American, and Saoirse Roman holds her own as a war refugee who joins the men on their trek. Weir, who read more than sixty books to research the film, brings his characteristic eye for detail and humanism to the sprawling $30 million saga, which was financed independently.

Finally, there was Canada’s The Whistleblower (pictured above), from first-time director Larysa Kondracki, winner of the Audience Award for Best Narrative Feature. Don’t let the reputation of the PS audience as a bunch of blue-haired seniors with middle-of-the-road tastes fool you; this same crowd got it right last year with The Girl With The Dragon Tattoo, and they’re on solid ground with this fact-based conspiracy thriller. Rachel Weisz plays Kathryn Bolkovac, a Nebraska police officer who, while stationed in Bosnia as a member of the U.N. peacekeeping force, exposed her co-workers in a human trafficking scandal. While the subject matter is better covered in the HBO min-series Human Trafficking, Weiz’s compelling performance elevates the material. As squirmy as the topic is, there’s a grim satisfaction in watching Bolkovac put her corrupt superiors through their paces, especially given how prevalent trafficking has become across Europe.

I wound up seeing eight movies over the course of three frantic days, nothing compared to the 35-plus that some festival-goers logged. The overload took its toll on some, however. At a Q&A after The Way Back, Peter Weir fielded a question from an older gentleman who was puzzled over why a certain character was not part of the final scenes, obviously having missed the character’s death only a few minutes earlier. Weir gently pointed out that the man had likely nodded off at the wrong moment. “You’ve seen too many movies” said Weir, as the auditorium rocked with laughter. As had we all.