Robbo In Berlin For Yelling To The Sky 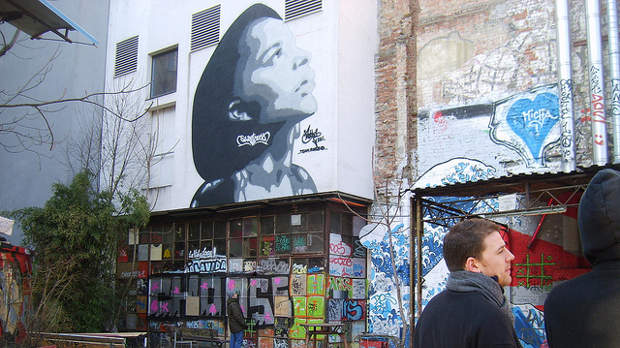 Filmmaker Victoria Mahoney premiered her first feature,Yelling to the Sky, in Competition at the Berlin Film Festival this month, and arriving in the city with her was British graffiti artist Robbo. And by the time of the film’s premiere, the city was the richer for a wall-sized mural of the film’s lead character, Sweetness (Zoe Kravitz). Below, Mahoney writes about the process of finding a home for Robbo’s work. Her story has an ironic coda given Robbo’s recent street rivalry with Banksy. Read on.
I always knew I’d be mounting a graffiti piece in tandem with the premiere of Yelling to the Sky. Since the day I finished the script, I’ve been holding a private wish for a graffiti piece in conjunction with our opening. It was a must. The only question was “who” and “how.”

Robbo and I met in London in November 2010. I pursued him with a fever, had no humility whatsoever about begging him to do the piece. He is a myth and a legend in the graff world, and, like our film, he’s an underdog.

Robbo and I spent the two-and-a-half months leading up to Berlinale going back and forth about which photo and why. He’d send me samples. I’d send him notes. The two of us carried on nonstop until we landed upon the photo he felt most inspired by. He was extremely specific about what he wanted and didn’t relent until he felt in synch. I was so grateful to realize he wasn’t just throwing a piece up for whatever heat it would bring him; instead he held such a strong measure of integrity from the first day to the last.

Many people thought I was crazy to have commissioned the likes of Robbo without a wall in place. “You’re going to Berlin without any idea of a wall, no contacts, no connections. You’re just going to show up and ask someone to loan you a wall?” I’d get this cockeyed look, smile (the smile all indie die-hard filmmakers live by) and calmly-confidently respond, “Hell yes.” The thought was never — and in our line of work can never be — What if this doesn’t work? The thought was and must always be, This is going to work. No if, and or buts.

I arrived in Berlin on a Thursday night. Dropped my bags. Hit the streets and walked around in the dark, scouting for walls. I would ask people for a gallery, or an area with galleries, thinking that as a backup a gallery owner would perhaps loan us a wall and we could paint it after the festival was over.

I was going on 52 hours without sleep, but I kept walking around asking people for “funky”: “Where’s the nearest funky part of Berlin?” After many repeated requests, “Tacheles” was the word to come back.

I raced there (thinking it was going to close), walked though the gilded archway and was gobsmacked. (Both Robbo and I had separately heard of this spot where you must go if you’re ever in Berlin but I never retained the name “Tacheles.” And neither did any of my friends. We’d only hear, “The place with the graffiti, sand and a DJ in a bus.”)

The history of Tacheles, where Robbo wound up putting the image, is extremely interesting. In short: 15 artists from the West and 15 artists from the East came together after the Wall fell to build an artistic community. Since then, Tacheles has become known around the world. Every inch of ground holds some form of creative expression. It gave birth to and now epitomizes the “street level-home-brew-museum.” More crucially, it is a graffiti mecca; every graff artist alive comes here at some point to grace their tag upon the walls, stairs and halls. It is something to behold.

Tacheles is kin to parts of New York in the ’80s. The first person I met was a cat named Peter (from N.Y., ironically). He’s one of hundreds of artists who just creates for the sake of creating and lives for conversations with the passersby. Peter hipped me to the lawless order and suggested that for a large scale, oversized piece I’d have to come back in the morning and talk to someone in one of the buildings to get permission. (Robbo and I agreed months ago that we preferred not to “borrow” a wall for this size and scope. “Borrowing” a wall would mean doing it in a single night on the fly with no chance for touch ups and the loss of micro detailing.) 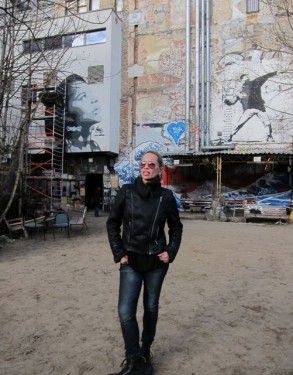 Picking Tacheles as home for our film’s mural was a conscious wish to help bring light to its possible near-demise. And I genuinely wanted to avoid doing a gesture that was purely self serving on any front. In the end and in a handshake, one of Tacheles’ forefounders, Ludwig, donated the back wall of his infamous bar, the “Zapata.” (There’s a wonderful piece inside the table tennis room that his son did of the characters from the namesake film.)

Producing partner Billy Mulligan arrived from Rotterdam, and we were soon shoeing off to rent scaffolding for the two-story wall. That proved more complex than a needle in a haystack but 24 hours later Billy saved the day by calling in a favor from a Rotterdam lab fellow.

Robbo and Billy built the four level scaffolding tower every morning at 7am and broke it down at the last flit of light 5:45pm. Robbo worked for three-and-a-half days, through rain and wind. Nothing would prevent us from making the Saturday, Feb 12th deadline.

Word got out that Robbo was in Berlin doing a piece so we had to go to further than normal lengths to hide and protect him. We would change his name every day. Simon, Jules, Bill Henry, Lionel, Luther…

It was sheer fluke, piss and vinegar — not intentional in the slightest that Robbo’s piece ended up parked beside a Banksy. The only free wall in all of Tacheles was the back of Zapata. For true. — Victoria Mahoney