A DIY DATE WITH “MR. SADMAN”

A few years ago I took part in the IFP Narrative Labs with a feature I wrote and directed called Mr. Sadman, about a 1990 Saddam Hussein double who loses his job and moves to Los Angeles to start his life over — a satire about what it truly means to become American.

We had a brief, almost nonexistent festival run and then regrouped and thought about next steps. Every now and then we’d get an inquiry from a distributor or sales agent, but in the end nothing really ever made sense for either us or them. “No stars” plus “no heat” equaled no leverage, so we knew we were always going to be dealing from a profound position of weakness. Furthermore, I had seen and heard enough from friends and other filmmakers who had gotten screwed by distributors of all shapes, sizes and reputations. Some of these productions took horrid deals ostensibly just so they could say their film got Distributed with a capital “D”.

My intention had always been to at least partially self-distribute, not as an act of desperation but as an act of common sense. Self-distribution used to be the equivalent of taking your mom to the prom, but now it’s more like walking into the gym with that mysterious, offbeat girl with the funky fashion-forward style from the rival high school. You have a responsibility to yourself and everyone you worked with to try to get the film out there as best you can, and for this particular project it just seemed to be a more pragmatic course of action than having a distributor relegate the film to a tiny thumbnail on page 14 of its online catalog.

One of the basic concepts was to make it as easy as possible for someone to watch the film. In our case, that meant implementing the popular “freemium” idea: offer a basic version for free and higher-end versions for a fee. I broke Mr. Sadman down into its DVD chapters and set it up for free streaming on my site with an ad sprinkled in here and there. I also created a free downloadable version for people to watch on laptops, desktops, iPads and any other smallish screen. I wanted it to look as good as or better than most current Netflix streams or BitTorrent downloads. For those who want a higher-res version for bigger screens, they can spend a little money to get the SD or HD versions or buy a DVD. All versions are DRM-free, of course.

Most recently I came up with a few premium offers just for fun. One’s called the “Dictator Pack” in which someone gets a copy of everything we currently have in the store plus a personal Q&A with me either on the phone, via video chat or, if you’re in LA, over a cup of coffee. Then there’s the “Dictator Deluxe Pack” where we’ll take a grand tour of all the major locations of the film, play a few games of H.O.R.S.E., watch a movie at the Arclight and go on a tour of my favorite eastside bars. This whole experience will be captured on video then edited down to a 5-10 minute keepsake. 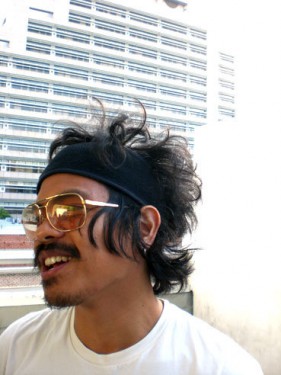 Do I expect anyone to buy any of these Dictator Packs? Not necessarily, but then again I really don’t know what to expect. All of this will change. The world’s moving away from mass markets to niche markets and some of the best ideas are coming from musicians, bands, painters, writers, etc. It’s therefore somewhat myopic to focus solely on “independent film” models when everyone is in the same “media” boat. Borrow, steal, learn from others. My goals are to experiment, keep things interesting, have some fun and prepare to shoot my next film this summer, Be a Man.

Overall we’re doing OK considering we’ve laid low in a pseudo-beta mode while waiting to get into Netflix and iTunes (some progress on the latter, absolutely none on the former). Even though those outlets are incredibly convenient to consumers, they can be incredibly inconvenient to the lone filmmaker. Thus, we’ve come to the realization that there’s no benefit in waiting any longer before making some kind of a DIY push.

It’s interesting, though, how people have found us in the interim. We’ve gotten some random traffic from the Middle East, and we’ve experienced spikes when Scoot McNairy, one of the leads in Mr. Sadman, was in Gareth Edwards’ indie hit Monsters and also when it was announced that Scoot was going to be in Brad Pitt’s next movie. We got another little spike when it was revealed that Sacha Baron Cohen was going to play Saddam Hussein in a studio film. (Maybe people got confused.) And recently we got a handful of hits from people looking for my friend Goh Nakamura who’s the lead in Dave Boyle’s Surrogate Valentine, which recently premiered at SXSW. Goh’s on the Mr. Sadman soundtrack.

The world is all interconnected. It’s strange like that, and I’m hoping it gets even stranger.

If you’re curious to check out Mr. Sadman or see how this whole distribution process goes, I’ll be detailing the experience at patrickepino.com.