by Michael Tully
in Columns, Filmmaking
on Apr 7, 2011

(Meek’s Cutoff is being distributed by Oscilloscope Laboratories. It opens theatrically at the Film Forum in NYC on Wednesday, April 8, 2011. Click on the links to learn more. )

As much as I approve of Kelly Reichardt’s Meek’s Cutoff in every single way, I’ve been finding it incredibly difficult to write a review of it. Not that I don’t have anything worthwhile to say. It’s just that everything I’ve come up with so far sounds like film school pretension. Though term papers could — and hopefully will — be written about how Reichardt revises and revitalizes the traditional Western in her most ambitious production yet, I worry that this type of treatment will keep Meek’s Cutoff relegated to cinephile circles, when this is a perfect example of a vital American independent film that should be used to help broaden less adventurous viewers’ horizons.

Though Reichardt’s previous two features, Old Joy and Wendy and Lucy, were slight in length and narrative scope, they nonetheless delivered a full emotional impact, as if Reichardt was proudly proclaiming herself a “short story” director. Well, so much for that theory. Meek’s Cutoff is a full-blooded novel. It’s not just the longer run time (104 minutes) or period setting (1845) that makes it a grander affair, yet fans of Reichardt’s earlier work can rest assured that even though her world has expanded, she has not sacrificed her bracingly intimate approach to storytelling for one flash of a frame.

Written by Jon Raymond (who is also making news as the screenwriter of the Todd Haynes HBO mini-series Mildred Pierce), Reichardt’s anti-Western completes the pair’s “Oregon Trilogy” that began with Old Joy and Wendy and Lucy. Like she did in Wendy and Lucy, Reichardt has once again wisely chosen to work with Michelle Williams (seriously, if Williams isn’t the best young American actress working in film today, who is?). 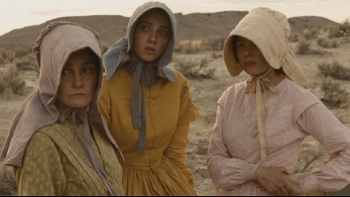 The story picks up on three families in mid-expedition, who have hired a guide named Meek (Bruce Greenwood) to lead them over the Cascade Mountains in Oregon. The families are on a forced equal footing, though Solomon Tetherow (Will Patton — close your eyes and, by golly, it’s Sam Shepard in Days of Heaven!) and his young wife Emily (Williams) are nonetheless looked up to by the other two couples (Neal White, Shirley Henderson, Paul Dano, Zoe Kazan). Reichardt doesn’t pull any punches in transporting us into this world, one that is video boxes away from that cozy, romantic, idealized American West we’ve come to expect. In a virtually dialogue-free first reel, presented in hushed long takes, as these diminutive figures make their way through a vast, seemingly endless expanse, not only do we feel like we’re right there beside them, it’s as if we’ve been journeying with them for weeks.

Meek’s constant posturing and bragging is as annoying to us as it is to Emily — not to mention Reichardt herself, who is using this character to provide both a political commentary and a blunt correction to the typical male hero that has consistently permeated Hollywood Westerns. These male leaders — in our governments, in our classrooms, in police cars — aren’t always noble and they certainly don’t know everything. They’re macho, brash, stubborn, arrogant, and obnoxious. Making matters worse in this film is that whenever the time comes time to have an important discussion, even the husbands participate in this game of dominance, handing the wagons’ reins to their wives as they gather together out of earshot to make important decisions, while their “partners” stand idly by in the distance, as unconsulted and ignored as the oxen beside them. Though she is making a blatantly feminist statement here, it’s a credit to Reichardt that in the context of this particular tale — and, in keeping with her previous work — her agenda feels most pressingly humanist.

As their punishing journey continues to weaken their bodies and spirits — predictably, Meek is too stubborn and proud to admit that he’s officially lost — the group captures a looming Native American (Rod Rondeaux), sparking a debate about what to do with him. At this point, Emily has had enough. In a few terse words, she lets Meek know that she sees all the way through his macho façade. Thirsty, hungry, and warped by the sun, the entire group begins to express distrust of one another, complicating an already dire situation.

Photographed in the conspicuously claustrophobic 1.37:1 square-frame Academy ratio by Christopher Blauvelt, Meek’s Cutoff is perhaps even more visually striking than had Reichardt opted for a widescreen presentation (clearly, this was another conscious act of deglamorization on her part, though it does reflect the shrouded perspective of the female characters in their bonnets). The soundtrack, compliments of composer Jeff Grace and sound designer Leslie Shatz, doesn’t call attention to itself, yet the efforts of these exceptionally gifted artists contribute volumes of ghostly, menacing atmosphere.

Reichardt’s gut-punch of a conclusion will confound many viewers — the old grump who sat beside me at a recent press screening expressed his distaste with a hilariously cursed grunt — but to these eyes, that conclusion is anything but open-ended. Though it’s set in the distant past, Meek’s Cutoff speaks curtly to our position as everyday American citizens in the very present. We must question our leaders, but more than that, we must-must-must refuse to let them lead us to the slaughter. Otherwise, we’re just specks in the desert, lost and about to die of dehydration.