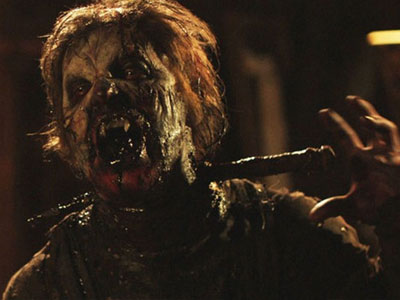 by Brandon Harris
in Director Interviews
on Apr 20, 2011 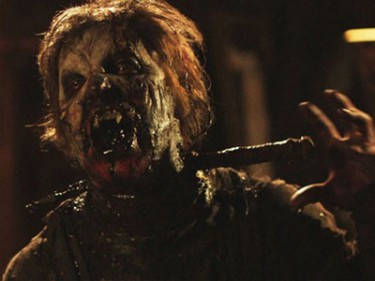 In so many ruined, dystopian futures, ravenous beings stalk the burned out countryside, praying on the flesh and/or blood of humans, while a small band of tough survivors, almost always including a grim professional killer, a protege and a young refugee, desperately try to escape this world overrun. This basic conceit resembles Jim Mickle’s somber, post-apocalyptic tone poem fashioned as a late night, grindhouse B movie, Stakeland, which proves altogether more satisfying than any of the recent cable and multiplex ready vampire narratives or dystopian dramas (The Road, Time of the Wolf, One Hundred Mornings or Children of Men). Despite its impressive production values, it is a vampire movie of remarkable constraint, with a tone of dry ennui and an expansive sense for depths of human complexity. It maintains the rugged genre sheen of old school schlock while making us question our ability to act gracefully and ethically in the face of collapse.

Produced by later day low-budget genre-meister Larry Fessenden, who is no stranger to vampire stories or genre narratives as vehicle for societal commentary, Stake Land was co-written by NYU graduate Mickle and star Nick D’Amici, who plays a vampire killer with a pimped out, Road Warrioresque ride. Together with a traumatized orphan, they encounter their fair share of vampires and equally dangerous cultists and lunatics, while searching for a rumored last outpost of humanity called New Eden. IFC Films opens Stakeland this Friday. 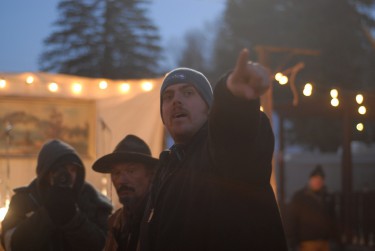 Filmmaker: How did the two of you hook up as collaborators and how was this film born out of your previous collaborations?

D’Amici: Jim and I met in 2001 while we were shooting a student film called Micky Lee up in Connecticut in a bunch of cabins. He was working as a grip on it and I was acting in it. It was a NYU thesis film. We just hit it off. Everyone was staying in these cabins up there. One guy on the crew, he was a really nice guy, but was kind of strange. He liked peeking into our cabins at night and stuff. You’d wake up in the morning and he’d be looking in your window. [laughs] So we met in this weird situation, and Jim and I were laughing about it. But we were also saying, “Wow, we should be making this movie, what a great movie this would be.” So we just hung in there, Jim had me do a part in his thesis film The Underdogs and then we tried to get another picture off the ground with the actor Victor Argo. We even shot a promo for that, and from then on we just kept pushing it and eventually we got Mulberry Street done.

Filmmaker: Do either of you have a long standing interest in the dystopian horror genre?

Mickle: Definitely. I sort of fell in love with movies through horror movies. I wanted to do special effects in high school and that sort of led to making little short films and then that led to really appreciating filmmaking. Then I went to NYU for film school and went through a period where I was surrounded by people making indie, meaning-of-life sort of movies. I was hoping to do a lot of stuff there, and when I got out I was sort of ready to have fun making monster movies again with a new set of influences and experiences. Growing up watching Sam Raimi‘s films, the Evil Dead movies, that ‘s when I first really fell in love with filmmaking — showy camera movements, having fun with the camera, a sort of personality in the filmmaking. Then came Dario Argento, and John Carpenter‘s, The Thing is probably my favorite movie. He opened me up to a lot of other genres and mixing genres.

Filmmaker: Was it difficult to raise the money for a such a high-concept horror thriller without any recognizable faces? If so, how did you go about it?

Mickle: For us it was actually easy. If it wasn’t for Larry Fessenden we may have had a more difficult time. We were trying to get another movie off the ground and we were having issues over casting and financing and making those two connections meet. This film sort of grew out of that frustration of not being able to pick up a camera and make a movie. That’s when Larry came along and made the connection to Dark Sky Films. It’s not a huge budget movie. We were able to make a pretty big scale movie for what the budget was. So I think that trade off was pretty good. The fact that it was a vampire movie helped give us a little freedom, and we had Larry in the middle who has a track record of making great movies no matter what the scale or who the actors are.

Filmmaker: Were there things within the storytelling that you had to scale to the size of budget you had?

D’Amici: We pretty much got to make what we wanted to make. If anything it was a compromised film with how the action was shot and handled. As a writer I tend to write a little bit over the top and then I’m pulled back to some sort of normal place that will work. That was probably the only place I could say where we had to compromise on this. Obviously, you’re always wondering, well how many vampires can we show here and stuff like that.

Mickle: With Mulberry Street I remember we cut a bit into the original because on that film there was like, “the reality pass” — you know, where we cut a lot of action scenes and really made sure that the scenes that were there were moving the story forward and doable. This time around when we were doing the script I think that there was an awareness of what we could do with what we would have. The only changes were very subtle stuff like how long we had to shoot certain scenes and how to scale things around how long we would have to execute a scene. How to get certain action scenes done within the time you had allotted. For instance the one-take helicopter shot, that was an attempt to condense something that was originally a big set piece scene that we were going to shoot over the course of several days.

Filmmaker: Did the two of you exercise the freedom to rewrite and change the course of the story you were telling as you shot or did you stay tethered to your original conceptions very closely?

D’Amici: We shot the film in two segments. We took three months off between portions of the shoot. We shot two weeks in the summer and I got to meet the entire cast. So when we finished shooting in the summer and we went back and had the downtime, we were able to look at what we had shot. Jim had edited much of it already. So getting to know the people we were working with, Danielle Harris‘ character and my character, we changed them. Originally she was much more of a beat-up old bar broad in the writing, and she was going to be Mister’s love interest in some sense/. But after meeting her I told Jim, “Man she could be my grandchild”, so we had to switch her character around and that kind of added a dimension to it we hadn’t anticipated before. She became her own thing instead of an appendage to the Mister character. Having that downtime, a lot of stuff did change, especially the ending. It kind of worked out as an advantage for us.

Filmmaker: Why was there that gap in the schedule? Were you waiting for the weather to change?

Mickle: We got greenlit in fall, and we wanted the movie to look like it was shot around then so we had a whole year to do stuff while we were waiting. We did some camera tests around March or so with Nick, and some of those shots are in the movie. That gave us the idea that in order to achieve these different looks for different parts of the film we could split the shoot up and do some of it in the summer and some of it in the fall, some of it in the winter. We knew we wanted to shoot in Pennsylvania. I grew up there, and I knew a lot of places that I had kind of imagined for the settings in the film, but I also know a lot of areas in upstate New York, in the Catskills that would give it a different flavor. Larry knows that area so we couldn’t really figure out if we wanted to shoot all of it in one spot. Eventually we decided to shoot one half of it there and the other half of it in the first place.

Filmmaker: The film achieves a strident, melancholy tone despite some of the genre theatrics in the filmmaking. Was that a difficult balance?

Mickle: Well after making Mulberry Street which was a relatively low-budget movie, there’s a lot of things in that movie I felt I had no control over, be they the schedule or the locations. It was just one thing after another. Everybody was working for free, and it’s difficult to do the best you could without a lot of prep time. So that’s what we really wanted — to have a lot of prep and know what we were getting into. I think we had a little bit bigger bag of tricks this time, we knew what we could do and what we couldn’t, what we would need to show and what we didn’t need to show, and we knew we didn’t have to spoon feed the audience. People do have a more sophisticated palate then we give them credit for, so we were confident we had something that would work. From post-production I began to edit the first scene, and I knew we would have to cut this movie like westerns were cut. We would have to use longish takes and make the tone gel and not worry about using all the coverage. It’s a big melting pot and the final glaze that brought everything together and made all the colors jive and give it a sense of loss and history was Jeff Grace‘s score. Its really holds all of the pieces together and fuses them.