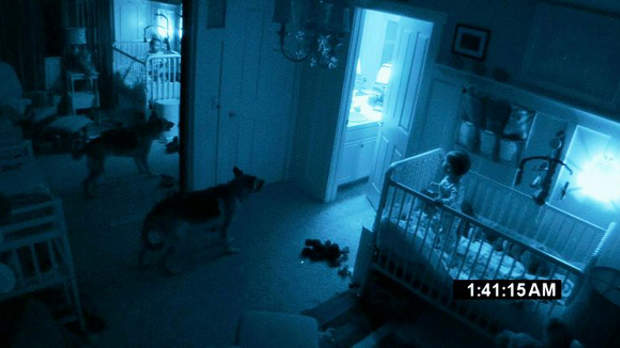 by Nicholas Rombes
in Filmmaking, Post-Production
on May 10, 2011

Paranormal Activity 2 is not an avant-garde film, but only because no one has argued that it is.

1. The Importance of Framing

The difference between commercial culture (pop culture) and the avant-garde is a matter of rhetorical framing. Jean-Luc Godard, for instance, created the conditions for the New Wave not only through his films, but through his words about his films, and about cinema in general. Confrontational, witty, manifesto-like, Godard framed the way people saw his films. Godard was an auteur of language, not just cinema. “A movie should have a beginning, a middle, and an end,” he famously said, “but not necessarily in that order.” Or “The cinema is truth 24-frames per second.” Like Lars von Trier (“it’s always been a lie that it’s difficult to make films”) he brought his ideas to a boil in public so that watching his movies became inseparable from recalling what he said about his movies or about cinema. (At the opposite end of the spectrum, there is the relative silence of directors like Stanley Kubrick or Terrence Malick, whose public withdrawal itself constitutes an aura of mystery.)

2. Creative Restraint
In his excellent book How a Film Theory Got Lost, in the chapter “How to Start an Avant-Garde” Robert Ray explores how, against our intuitive sense that the avant-garde strives to separate itself from the mainstream, in fact just the opposite is more often true. To those who caution that, in today’s environment of rapid cooption there is no room for the avant-garde to thrive separate from mass culture, Ray reminds his readers of how “the avant-garde itself has, throughout its history, promoted its own acceptance.” He notes, for instance, how many avant-garde movements have a “star” associated with them, someone who attracts the attention and publicity of the mainstream, such as Picasso (Cubism), Breton (Surrealism), Warhol (Pop Art), Godard (The New Wave), Johnny Rotten (Punk), or Derrida (Deconstruction). Were the Sex Pistols any less radical because of their notoriety?

Paranormal Activity 2’s fixed cameras constitute a form of creative restraint that push the boundaries of cinematic narrative. Like Mike Figgis’s Timecode (four cameras filming in real time with no edits), Lars von Trier’s Dancer in the Dark (over 100 stationary cameras to capture the musical numbers), or Alexander Sokurov’s Russian Ark (the entire film constitutes one 96-minute long take) Tod Williams’s film employs constraint as a creative force. As Simon Abrams has suggested in his Slant review, the switching-between-home-security-cameras strategy in the film is motivated not by any internal sense, but rather by a ruthless narrative logic. There are essentially two levels of film: the security camera footage, and that footage obviously shaped and edited into the “footage” that constitutes the whole of Paranormal Activity 2.

3. Repetition and Disorder
There is a six-minute stretch of the film—roughly between 42:30 and 48:30—with no dialogue, recalling the dialogue-free spans of time more typical in the films of Stanley Kubrick or late ’70s-early ’80s De Palma. Six minutes with no dialog constitutes an eternity in commercial cinema. It is a radically deconstructive sequence. This six minutes, as Ali (the daughter) is home alone babysitting the infant Hunter, is a series of carefully modulated medium-long takes from various fixed surveillance cameras the family has had installed. The rhythm of the sequence—almost suggesting the slow, rhythmic changing of traffic lights—creates a sort of structural tension that outstrips the more generic screw-tightening of the film itself, which is fully within the haunted house tradition. There are no less than 26 shots—each from a fixed security camera and ranging between just a few seconds to a full minute—sequenced in this order:

It is through the monotonous repetition of these familiar images that the specter of disorder arises. 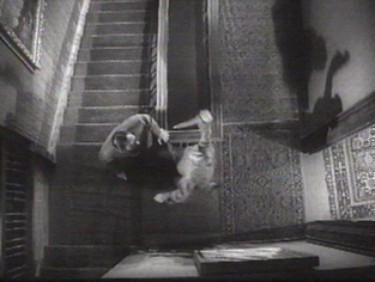 4. The Banality of Terror in the Everyday
The terror lies not just in anticipation of what will happen, but in the uncanny shots framing the empty spaces of the house. It is the mundane trafficked areas of the house—the foyer, the kitchen—where terror lurks. Both of the Paranormal films largely dispense with the typical scary places of haunted houses: the basement and the attic. Although in both films there are sequences in these spaces, they are relatively brief, almost nods to convention. If anything, the terror in the open spaces of the houses recalls the knife-attack on Arbogast at the top of the stairs in Psycho, where we expected something bad to happen to him as he approached mother’s room–or once he was in it–rather than on the open and free landing at the top of the stairs, where he was not trapped by architecture.

In an essay from 1919, Freud describes the uncanny as “in reality nothing new or alien, but something which is familiar and old-established in the mind and which has become alienated from it only through the process of repression.” It is precisely in the repetition of the everyday, the familiar, that the traces of terrifying unfamiliarity arise. The terror is not something “out there” but rather something “in there.”

5. The Importance of Sequencing
To what extent is Paranormal Activity 2—a film whose generic narrative momentum is constrained by a repetition that foregrounds technique over content—a structural film? The sequence of surveillance shots (outdoor front, outdoor back [the pool], kitchen, family room, foyer, Hunter’s room) occurs in that just that order on a regular basis, at intervals beginning at approximately these times:

The predictability of the sequencing means that we begin to look for difference. The genre expectations we bring to the film lead us to believe that something will change, that something will happen. The static surveillance shots are the ultimate expression of mise-en-scène, inviting viewers to scan the screen for information, for clues, for the slightest of movements. We become complicit in the visual interrogation of domestic space: the banality of hallways, kitchen cabinets, family room sofas, closet doors.

6. The Fixed Camera Manifesto
Our shaky era demands a steady camera. “An Uncontrolled Cinema” has lead to the Dogme Manifesto, contributing to the liberation of the camera from its sensible moorings.

+The camera shall be fixed, attached, or integrated in such a way as to suggest the camera’s fixity. Mounted cameras, surveillance style, such as surveil our highway system, are clear examples. Cameras built into laptops, cell phones, and other devices also count, as long as they are still. For example, the first 24 seconds of this clip from Bebe Zeva (dir. Tao Lin & Megan Boyle, 2011).

+The camera shall be stationary for at least 60% of the film’s running time. The only circumstance in which the camera shall move and still count as “stationary” is under the condition of a moving vehicle, such as a car, a train, or a plane. For example, a fixed camera (not hand-held) in a moving taxi counts as a stationary camera.

+The film shall contain at least one sequence of an unedited, uncut shot with a stationary camera that lasts at least 4 minutes. While mobile long takes are more common (i.e., near the end of Michelangelo Antonioni’s The Passenger, beginning here at the 1:05 mark, or this from the opening of Orson Welles’s Touch of Evil) the fixed camera film shall include a 4-minute unbroken shot with absolutely no camera movement

+The auteurs of the Fixed Camera Movement are: