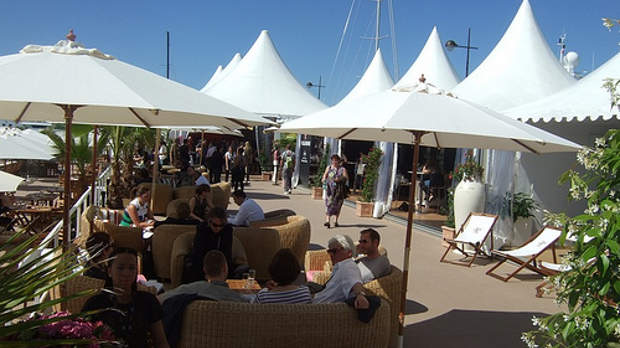 I tell people every year, but they don’t believe me: it’s actually pretty easy to attend the Cannes Film Festival. If you’ve got a business card and some reasonable connection to the film industry, you can usually register on site. Or, to be on the safe side (which is recommended), accredit yourself through Unifrance by their mid-March deadline. An industry badge gets you into all the movies, but, again, if you want to be on the safe side, you can buy a market badge for 350 euros (about $500). This gets you into all the regular screenings and the usually less crowded, easier to slip in and out of market screenings — not just the B-schlock but also most of the films in the regular festival too.

But what if you want to be a little more official and don’t have that Cannes-worthy feature? Well, there are other auspices under which to go. Prime among them is the Producer’s Network (pictured above), which offers a spate of morning breakfasts in which industry veterans spend 90 minutes in small-group discussions with filmmakers and producers of all experience levels. There are also evening cocktails and other events, including an excellent but also somewhat unfathomable closing night party that goes from 1:00 AM to dawn; how the organizers, who are up early every day setting up the breakfasts, have the stamina to party hard at the end I don’t know.) Registration is only 400 euros, and gets you a market badge as well as all the programming. IFP was a partner in the Producer’s Network this year, and Joana Vicente and I moderated one of the morning tables. I’m considering these conversations off the record, but suffice to say that I learned quite a bit listening to the lawyers, sales agents and agents who stopped by, and I was also impressed by the professionalism and skill level of those attending.

On the record in Cannes this year was producer Kyle Martin (Tiny Furniture), who attended the festival and the Producers Network as an IFP-sponsored fellow to one of its divisions, the Producer’s Workshop. He’s working on a Sundance Lab project, a drama by Lance Edmands titled Bluebird, and says his goals in coming to Cannes were to “get my feet wet, pick up the lay of the land, and get an understanding of the international distribution scene. That way, when I hopefully will have projects to return with in a year or two, I’ll be able to hit the ground running.” While he wasn’t attending “the panels, seminars and case studies,” Smith said he’d meet foreign distributors and financiers at parties or by just going to their booths in the market. “My goal is to collect as many business cards as possible and follow up when I get back to the States,” he says.

Angelique Monet of Greta Joanne Entertainment has been to Cannes many times, but this was her first year at the Producer’s Network. “In America, I’m an independent filmmaker with hands-on experience,” she says, “and it was amazing to have this opportunity to learn how film is produced in other countries. I have a slate of films, and at the Producers Network I was able to meet several coproduction partners for my projects from Colombia, France and the U.K.” For the legions of short filmmakers out there, Cannes also has the Short Film Corner, which occupies a pretty sizable chunk of real estate in the basement of the Palais. I spoke with Manager Alice Kharoubi, who describes the Short Film Corner as “an area where people came come and present their short films. And, every accredited person can come and watch these films in our digital film library. We have short film buyers, film festival programmers, producers and sales agents, and people looking for young talent. This year we have 1,955 short films, and we refused 15% — only films that were not made in a professional way. And we also organize workshops, breakfasts, conferences, and a happy hour every day.”

Is there still a market for short films?

“Yes, it exists,” Kharoubi says. “Of course it’s not as big as the feature market, but we have almost 50 short film buyers who come to watch the films.”

How does one become a part of the Short Film Market? “There’s a process of registration,” she continues. “The fee is 95 euros, and for that we digitalize your short film, give you access to Cinando, and we facilitate two festival accreditations.”

Does Kharoubi see any trends in short film production this year? “Yes — the quality of the shorts was much higher, and the filmmakers were really focused on what they had to do. They really act like professionals.” Christina Acevdeo attended the Short Film Corner with her film Wild Idle. (She is pictured here on the Croissette with her mother, Georgette Ciukurestu, who co-stars in the film). In an email, she wrote about her experience, “In all honesty I did not get to spend much time in the Short Film Corner vicinity, but being a part of the Short Film Corner allowed me an opportunity like no other. I was able to attend the Cannes Film Festival, see an unbelievable amount of films, and really gain insight into the [international] marketing, sales, and distribution side of filmmaking. It is quite overwhelming, as a young filmmaker, to be in the presence of so many people who contribute to the film industry in various ways, but the contacts I have made, and the people I have met, are priceless. Just from going to a cafe, a screening, or a party on the beach I was able to meet one person or another in the industry who would then connect me to another person that I could talk to about my film.”

Does she have advice for filmmakers attending next year? “My advice to a filmmaker who has a short film is: submit your film to the short film corner; stay at an apartment in Cannes; prepare to eat a lot of baguettes; bring 50 screeners of your film (and always carry two with you because most people in the industry at Cannes don’t have time to pop by the Short Film Corner to see your short); and talk to everyone! Try to sneak into parties/events, see at least one film a day, bring cards, and a box to collect other people’s cards in (because you will get a lot), and then escape to the French countryside when it’s all over.”

Trailer for Wild Idle from Christina Acevedo on Vimeo.

Sebastian Piras attended Cannes for the first time with his short, Art Depot. In an email he wrote, “The Short Film Corner is certainly a great experience for newcomers to the film festival circuit as it allows access to most of the festival experience and gives the opportunity to experience firsthand the dynamics of the film industry’s at times complex structure — especially in the best film festival and market place that there is out there.”

What was his specific experience like? “I didn’t spend too much time in the actual booth, which was rather well organized and always full of enthusiathic young filmmakers,” he continues. “I was flattered that my short was one of the 10 picks of the Canadian Film Board shorts contest. It certainly [gained] it exposure (275,000 views on YouTube)… The comments were rather polarized (which i prefer anyways to a all positive or all negative reaction). Unfortunately i had to cut my stay in Cannes short — i think a week is the least time to be spent there.”