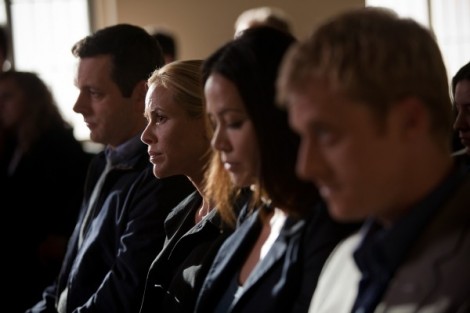 by Brandon Harris
in Director Interviews
on Jun 1, 2011 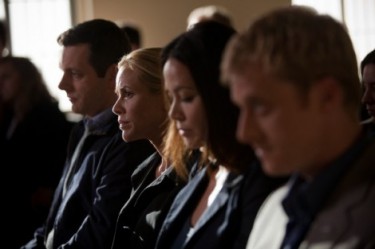 It’s been a dozen years since the Columbine tragedy and almost a half decade since the Virginia Tech shooting, but random outbursts of violence by troubled young male students with easy access to weaponry are still among the most troubling topics that our society is struggling to come to grips with. Less self consciously arty than say an Elephant or We Need to Talk About Kevin, Shawn Ku‘s Beautiful Boy tells the story of Bill and Kate, (Michael Sheen and Maria Bello), a relatively comfortable suburban couple who have entered middle age content but relatively uninspired. First and foremost a searing, naturalist portrait of a marriage on the rocks, the facade of normality and relative leisure that they’ve built for themselves is brutally shattered after their college freshman son Sammy (Kyle Gallner) kills himself and several of his classmates in a largely unexplained crime that leaves a giant crater at the very center of their lives.

Torn asunder by equal parts tragedy and inertia, the couple have to come to grips not just with the unspeakable crime but with their own culpability (or lack there of) and the very real possibility that the tragedy has allowed them to finally see themselves for what they are; a couple out of love. How these parents of a school shooter  find a new normal is documented in unglamorous but handsome hand held frames by Ku and his cinematographer Michael Filmngari, who brings a bracing, washed out immediacy to the proceedings. The film is quietly devastating, but never tries to tug at our heartstrings; that it manages to do so anyway is a credit to its unusual director.

Shawn Ku’s path to directing is highly unique. Educated in medicine at Harvard and Columbia, Ku planned on being a doctor before finding his way to cinema. A former Broadway dancer, he both acted and did choreography on several films before making his directorial debut Pretty Dead Girl in 2004. He debuted Beautiful Boy in San Sebastien and Toronto last September, where it won a FIPRESCI prize. It opens in Manhattan on Friday. 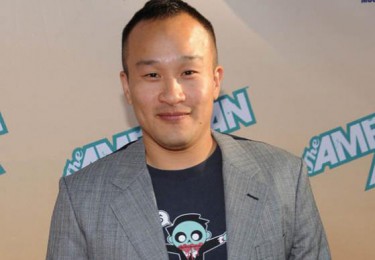 Filmmaker: Did this project start with the idea of making a film about a teenage shooter?

Ku: I set out initially to write a story about a relationship that had fallen apart, about two people who have created a life together, have spent all these years together, who don’t know each other as well as they thought they did. To a certain extent, they’ve grown apart or grown in different ways. Lovers who are strangers. It wasn’t until a little bit later that we stumbled upon the idea of making them the parents of a shooter. The Virginia Tech shooting actually affected my family a lot, my parents had gone to school there. When we came upon the idea of it, I had just been through a big, surprising loss of a good friend of mine who had died in my home. I was the one who found the body. I was the one who had called his parents. I was the stranger on the phone who told them their son was dead for no explainable reason. So when we came upon the idea of making them the parents of a shooter, it really felt like nothing we had ever seen before. So often the parents in a situation like this just completely disappear from the discussion. They’re forced into hiding. So it’s hard to do research about what it’s like to go through such a horrific tragedy. You don’t even have a home to hide in. So we just wanted to shed some light, our light on these two people who’ve been both ignored within and blamed for these terrible tragedies.

Filmmaker: You got terrific performances out of Maria Bello and Michael Sheen. How did you attract them to the project?

Ku: I settled in on Maria and Michael fairly early. We sort of went after Maria first. We definitely had a hard time getting past the gatekeepers. Understandably so because at that time we didn’t have our money together yet. Our budget was so small, we weren’t offering a whole lot of money. So it was very difficult getting it to their representation. Once we were finally able to get them the script, it became clear that both Maria and Michael were hungry to do something meatier than a lot of the stuff they were being offered at the time. Then we were sort of off and running. You know, you’re pursuing money at the same time and sadly they’re both contingent on each other, so it can be a vicious cycle. It’s a weird blind chess game. There’s not money unless there’s talent, there’s not talent unless there’s money. It came together through the sheer will power of our producers and their management to be willing to get involved, which was great. It wasn’t easy but by the time I met the first producer on this project to when we were shooting was just about a year and a half. So for an independent film with difficult subject matter, that’s a pretty quick turnaround. I hear about people developing projects for years and years and years trying to just get one meeting or one piece of financing.

Filmmaker: You use hand held cameras, long lingering shoots and a sort of observational style with long lenses in scenes of individual grief mixed with very intimate, profile-y close ups during the more intense conversational scenes. What motivated your aesthetic choices?

Ku: When we began preparing this film I knew I wanted this movie to feel real. I wanted to feel like these two people could be anybody. So with that in mind, we started talking about different movies and how they were shot and what they do to you visually. Its important to have those kind of discussions with your collaborators so that they can get in your head and have a sort of shorthand for what you’re talking about in terms of style. We came to a couple of touchstones very quickly, which were United 93 and 21 Grams.

Ku: Well they became real visual models for us. There is sort of a voyeuristic style in 21 Grams and they play a lot with darkness and light. So that became an aesthetic and it evolved from there. You intend for something to be some way and it evolves into its own thing, sort of like a child winds up growing on its own. We sort of came to a vernacular, me and Michael [Filmngari] about having a nervous camera. I kind of liken it to standing at a party and talking to a couple at a party and suddenly they’re having an argument and you’re kind of stuck there and you don’t know whether or not to leave. So there was definitely that sort of personality given to the camera. For instance, when Maria is sleeping in her son’s bed, it wouldn’t make sense given that style to go right up to her, so we sort of camped out in the hallway and observe her from a distance. So you’re using a longer lens and you’re in the hallway and there is sort of a voyeuristic nature to it because these people really can’t escape this thing hanging over them.

Filmmaker: One shot that stands out in particularly is the incredibly long, hand held take when they break up in the hotel room. It’s the major pivot point in the movie and perhaps its most dynamic. It has an improvisatory feel to it.

Ku: That was a scene we spent a lot of time writing. It’s sort of the culmination of everything that’s been happening to them up until that point. Everything gets said, all of those fears and accusations they’ve been holding back and when they’re screaming at each other they’re also screaming at themselves on a certain level. They were pretty tied to the script. They added little nuances here and there but it wasn’t nearly as improvisational as some other scenes where we shuffled around a bit more. It’s a seven or eight page argument. I really wanted that to be shot in one shot head to toe. I wanted our cinematographer to have to catch it in a documentary style, as if it were never going to happen again. We dedicated a whole day of our eighteen day shoot to that one scene. We spent more than half of the day just blocking it. It’s quite an intricate dance, it’s not just two people in a hotel room, it’s two people in a hotel room with a lot of furniture, a cinematographer, a focus puller and a boom operator. You don’t just want them to stand in the same place one the ground while they’re screaming at each other, they move around the room, they avoid and chase each other, they try to leave, they come back, there’s a lot of this sort of back and forth and we need to be close to them at some points and further away at others. We tried to condense all the coverage of an eight minute scene in one shot. It was pretty much like rehearsing a one act play. We spent so much time preparing it that by the time we reaching lunch that day, I think everyone was itching to just do it. The actors really rarely had the chance to do a whole scene from head to toe so I think they were excited about it. So much of cinema is about capturing these little shards and cutting them up that to be able to run free over the course of eight minutes is really exciting for an actor I think.

Filmmaker: What take did you end up using?

Ku: It was the third or fourth I think.