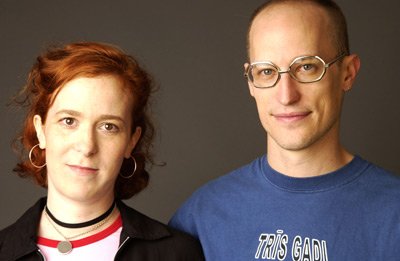 by Brandon Harris
in Director Interviews
on Jun 15, 2011 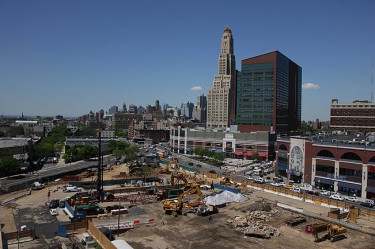 In 2004 it was announced that real-estate developer and New Jersey Nets co-owner Bruce Ratner planned to build a new arena for the team on the Atlantic Rail Yards site. Right in the heart of the borough, just a short walk from Downtown Brooklyn, Ft. Greene, Park Slope and Prospect Heights, it was a prime piece of real-estate, and the developer stood to make a tremendous amount of money if he could successfully move the team to Brooklyn. Despite coming with the promise of mixed-income housing, many locals were unconvinced of the project’s necessity and many who lived in the area targeted for redevelopment refused to leave their homes for the sake of a new workplace for millionaire athletes and their billionaire team owners, who also include rapper Jay-Z and Russian oligarch Mikhail Prokhorov, the team’s principle owner. As backlash against the proposed new stadium began, some neighborhood luminaries, such as novelist Colson Whitehead, began putting the whole thing in perspective while documentarians Michael Galinsky and Suki Hawley began following around individuals involved with the resistance to the project, one whom had the overwhelming support of local and state politicians.

Eight years in the making, Battle for Brooklyn is Galinsky and Hawley’s in-depth portrait of the fight over this swath of Brooklyn property. Perhaps the most insightful film about urban planning and eminent domain to yet emerge, it is also a muckraking portrait of system corruption, of the ways that money causes undue influence within our political system and how the wealthy can muscle their preferred message through the media in increasingly draconian and anti-democratic ways. After playing at HotDocs, Rooftop Films and the Brooklyn International Film Festival, it opens this Friday at Manhattan’s Cinema Village and Brooklyn’s IndieScreen. 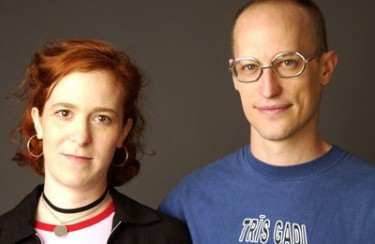 Filmmaker: You both live in Brooklyn, not to far from the development site. Did you embark upon this film as part of the activist cause against the Atlantic Yards project?

Galinsky: It’s kind of the opposite. Not that we didn’t want to be part of the activism, but we read about it in The New York Times and said, “wow, this sounds like a press release.” This is weird. That’s often how we get into stories. We say, “I want to know more, this doesn’t seem like the real story.” I asked all my neighbors, since we do live near the project site and our daughter went to daycare right there next to it, and [they said], “Well, it’s the Governor, the Mayor, what are you going to do?” Everyone seemed to think it was a terrible idea, but what are you going to do? All the politicians are for it. A couple days later I saw a sign that said, “Stop the Project!” I called the number on the sign and connected to a woman named Patti Hagan, who you see in the film. She started talking my ear off so I told her, “I’ll see you in five minutes.” I drove over right then and started shooting. We didn’t know if we’d have a movie or not right then, but that’s our process. We jump into it right away, then figure out what it is. Right from the beginning we knew we didn’t want to be a part of the activism against the project because then it would be an activist film, and we really didn’t want it to be an activist film.

Filmmaker: I imagine you shot a number of people involved with the activist movement in the early years of the project and then narrowed your focus to a few specific individuals?

Hawley: Well, as Michael said, it started with Patti. She seemed very committed to this fight so she definitely seemed like the main character. As she led press people and Michael around the footprints, she started talking about these people who were new to the neighborhood. She called the loft dwellers and she said, “I don’t think they’re going to stick it out, but there is this one guy who may just stay and figh,t and his name is Dan Goldstein.” Michael said, “I know Dan!” We knew him previously and so we decided to start shooting with Dan. Obviously that’s a very easy in. Now at that time we didn’t realize Dan would be the last remaining holdout because many people were fighting, but he seemed like an obvious person to follow. He was under huge stress and very emotionally affected by this story. He proved to be a great way into the story.

Galinsky: In the end, he became more of the main character because he was the one who had that standing and the ability to fight the project to the very end.

Filmmaker: You do get a chance to interview some of Ratner’s people and Borough President Marty Moskowitz in the film; did you pursue other high profile politicians or civic leaders who had supported the project?

Hawley: We have interviews with Bruce Bender, the VP of Forest City Ratner, but we made a clear decision at the beginning that this would be a character-driven film and not an issue-driven film. It’s much easier to reach a broader audience by following a character under pressure than following a issue where you’re inevitably preaching to the converted.

Galinsky: If you watched Erin Brockovich, you’re with Erin Brockovich. You’re not going to be with the people she’s fighting against because that’s just a different kind of movie. I’m not saying the model for the film was Erin Brockovich, but I think it’s more akin to that kind of film than the typical issue-driven documentary. We wanted this movie to feel like a river you’re in instead of a “point, counter point, one person says this, another says that” sort of thing. In some ways, the movie is a reaction to that idea of coverage as it’s played out in the media. When you have a developer who is spending $1.5 million a year on publicity, they’re going to control the narrative. The way they control it is, they send out a press release and everybody quotes their press release and then they scrambled to find someone to offer a slightly opposing view. Since they’re reaching everybody with their message, their message overrides that of everyone else. The other voice doesn’t get heard. So in a way it’s about retaking that narrative. They controlled the narrative for the entire time, but at the end of the movie Michael Bloomberg says, “No one’s going to care how long it took, they’re just going to see that it was done.” In a way it’s kind of an answer to that sort of sentiment, if we can sort of retake the narrative as average people instead of the people in power, there’s some sense that, no we will remember.

Hawley: We did try to take the narrative away from the simple “he said, she said” sort of journalism. That sort of thing led to people not really understanding what was going on right under their noses. It went on like that for seven years. If you ask any typical New Yorker however, they would not be able to tell you what the whole Atlantic Yards fight had been about except that it involved an arena coming to Brooklyn. This is such a complex story that it was difficult to tell, and I think the media defaulted to the most simplistic telling: “he wants this and the opposition doesn’t.”

Filmmaker: With the financial and political backing that the project had, do you think there’s anything that the activists and people like City Councilman Laetitia James could’ve done to turn the tide against the project?

Hawley: No. In this case the cards were so stacked against the little people that there was no chance for them to affect the political process because no locally elected official was going to have a vote on this. It just went to this high board of three men in a room who just eventually approved the project. There was no political forum for anyone to effect or change this project.

Galinsky: I went to a meeting yesterday where there’s an attempt by several groups to pass a new law to get some oversight over the project because it’s such a mess now, they have control over all the property for this arena and it’s increasingly baffling and crazy what they’re planning to do when you look at it closely. One thing that’s been interesting is that, even among people who generally support the project, we haven’t had anyone say anything bad about the film, including people who are in it who don’t look that good in the movie. Last Friday, we had a screening and James Caldwell came. He’s the president of BUILD, one of the organizations that supported the project. BUILD has managed to get seven people union cards for a two billion dollar subsidy. He’s even said, “I love the movie, I think it’s a great movie.”

Hawley: The opposition tried so hard to effect this project and to change it. They found another developer who offered three times the money Forest City Ratner did for the rail yards. They found a developer who would have created housing and jobs without using eminent domain to remove people from their homes. The local politicians who represented the direct area were very against it and City Councilwoman James was very vocal, but she had no way of really effecting the outcome. It’s mindboggling really.

Galinsky: Part of the reason we made the movie is that we don’t approve of top down government that ignores the will of the people and the interest of the community.

Hawley: We talk about why the government would do this sort of thing a lot. It was under George Pataki and Bloomberg and then through two other Governors, Eliot Spitzer and David Patterson, all of whom supported it even though there were clearly some questions about the way it was being done that no one wanted to address. Why? The only thing I can come up with is that Ratner went to school with Pataki, they were in law school together. It was a big project that was easy to wrap your mind around. It was easy to say that it was going to create jobs and housing, both of which are desperately needed in this part of Brooklyn. It was something that they could all see as a legacy project. Bloomberg is hoping that everyone will forget how long it took and at what cost to our values it was pushed through.

Filmmaker: Will people forget? Do you think some good can come of the project in the long run?

Galinsky: I’m such a optimist, I would say throughout the process, “There’s no way this is going to happen.” And people would just sort of roll their eyes at me. I was wrong, but I’m going to be optimistic again and say that I think the film will affect that legacy, I think people will remember how it got built. I went to a meeting yesterday in which people are still plotting to retake control of the property, of devising ways to stymie the project legally, because he’s not going to build housing, he’s not going to do what he said. Istead he’s created a blight, and so it should be taken back. Hopefully the film will help in that process. So that what’s happened won’t be forgotten.