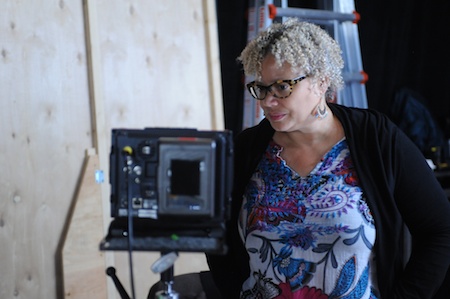 Filmmaker Kasi Lemmons (Talk to Me, The Caveman’s Valentine, Eve’s Bayou) attended this year’s Sundance Director’s Lab as an advisor, and here is a blog report about her experience.

I’ve been back in Manhattan for a few days, but my head is still on the Mountain. I’m thinking about the fellows, who are shooting and editing their final scenes. The progress and maturity of vision that I witnessed while I was there was incredible. I saw the filmmakers grow and stretch and discover themselves in the process. The rigorous shooting schedule taught them how to organize their day so that they could get their shots, how to communicate with their crew and get deep and nuanced performances from their actors. There was very little time for indecision. The crews were fabulous, and the actors brought an incredible array of talent to the projects. The filmmakers were encouraged to work with the scenes they’re most afraid of. They set tremendous challenges for themselves. Yolanda Cruz had an 11-year0old lead, Keith Davis was exploring grief and the visual language of psychic visions, Holden Abigail Osborne was directing herself in the lead role, Sara Colangelo and Carlo Mirabella-Davis had scenes that were intimate and intense, requiring a very deep trust between the actors and the filmmaker. Talya Lavie shot a hilarious fight scene with 38 shots, Bogdan Mustata shot a patricidal murder that was an act of love and Liliana Greenfield-Sanders’s masochistic lead character deftly walked the fine line between drama and comedy. Their courage humbled me and their triumphs thrilled us all. There is no question that this group of aspiring filmmakers is up to the challenge of feature directing. I can’t wait to see their films.

I feel so privileged to have worked with this year’s incredible group of advisors. I think I made some friends for life. I hope so. — Kasi Lemmons