This year marks the 15th year of Rooftop Films, New York City’s increasingly influential and successful outdoor independent screening series. The organization’s success is a testament to the vision and tireless work of founder and artistic director Mark Rosenberg and program director Dan Nuxoll, who have made Rooftop a unique and vital indie institution.

Rooftop’s shows are always intimate and welcoming — even if there are 1,000 people in attendance — and those qualities have their roots in the organization’s humble beginnings. The very first event took place on the roof of Rosenberg’s tenement building in the East Village. He expected 25 people to turn up, but ended up playing host to 300. Though his landlord evicted him after hearing about the screening, that initial success spurred Rosenberg to organize another Rooftop event in 1998, and then five more in 1999. These shows took place on the roof of Peter’s Car Corp., an artist’s space in Brooklyn run by Nuxoll, who had been friends with Rosenberg since they were 18. In 2002 Nuxoll came on board as Rooftop’s program director, and Rooftop now has 50 shows per year as part of its Summer Series. They take place all over New York City, and Rosenberg and Nuxoll are always keen to work with new venue partners. In 2003 they famously convinced New York State to allow them to organize a screening of short films about public space on Governor’s Island in New York harbor. It was the first time the island was opened to the public in 200 years. The 1,500 tickets sold out in minutes, and Rosenberg recalls the “city-wide buzz from what Rooftop did.” 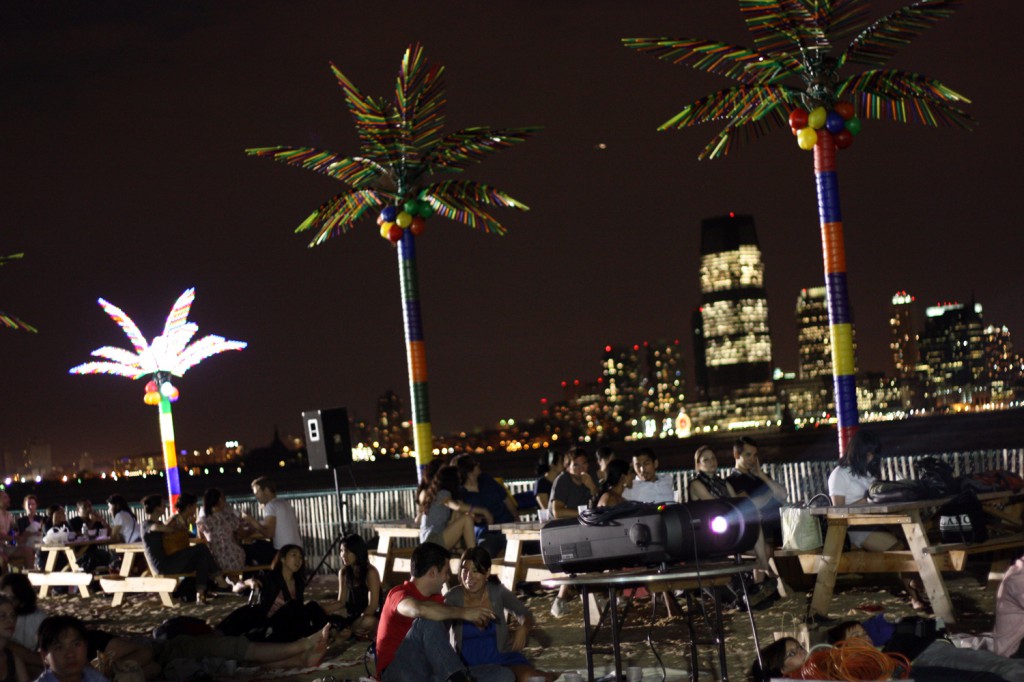 The Rooftop programmers take great pleasure in putting together an experience, whether that’s by finding the ideal location for a given film, having live music at screenings, or just finding other creative ways to make the movies come alive. “It’s not just outdoors, it’s the entire evening that’s more for the audience and for the filmmaker,” says Rosenberg. “And that’s what an artist is going for; they want to make something that people will remember.”

Asked for some of the most memorable Rooftop nights, Nuxoll cites the Gasland screening in a part of Pennsylvania directly affected by fracking; the Darkon show where LARPers fought in full battle gear; and the Strongman show after which “the entire audience went downstairs to watch the subject be [intentionally] run over by an SUV.” Rosenberg’s personal favorites include the screening of Trouble the Water in Central Park where subject Kimberly Rivers Roberts performed her music, and the romance short film night in 2010 where he proposed to his girlfriend in front of hundreds of loved-up audience members.

Though Rosenberg and Nuxoll screened only short films until about 2003, Rooftop now shows 25 features each summer. More than just another stop on the film festival circuit, Rooftop can offer a special energy that a screening in a regular movie theater cannot. Ben Steinbauer’s documentary Winnebago Man got a distribution deal on the strength of its now-legendary show where, on a perfect summer night at the Lower East Side’s Open Road Rooftop, it played like gangbusters to a crowd of almost 1,000 people. “Mark and Dan helped us arrange a screening early in our film’s festival run and it turned out to be the perfect venue to invite potential distributors to,” says Steinbauer. “The audience response was so strong that we were picked up by Kino Lorber for theatrical distribution.” Tiny Furniture’s Lena Dunham was also impressed by “the expertise, thoughtfulness, and commitment” that Rooftop puts into their events. “The sense of community I felt at my screening was palpable,” she says. “I could really feel that there were folks attending the screening in order to link up with friends and acquaintances that were brought together by other Rooftop events.”

Sean Durkin, director of the 2011 Sundance hit Martha Marcy May Marlene, received a postproduction grant from the Rooftop Filmmakers’ Fund, which Rosenberg started in 1999. “Without it, we would have totally run out of funds, so it was a final key piece of getting the film done for Sundance,” says Durkin. “It definitely gave us a cushion while we were shooting and gave us freedom to make certain choices without worrying about not having money left over for post.”

While other outdoor screening series show classics, B-movies and blockbusters, Rooftop stands alone in presenting new independent cinema. “It’s very difficult to run a film festival of new independent films, and it’s also very difficult to run an outdoor screening series,” explains Rosenberg. “Trying to do both simultaneously is a lot more work than most organizations are able to do. But doing something that’s unique and difficult just makes it that much more rewarding when we pull it off.”

Rooftop has organically evolved and grown over the past 15 years, and it’s always looking to the future. In the works is a screening series in Coney Island, a production partnership with Filmmaker contributor Mike Plante’s Cinemad imprint, and further expansion beyond New York City. As to the secret of Rooftop’s success, according to Nuxoll, it’s simple: hard work and a fervent belief in what they’re doing. “We take our mission very seriously, and do everything that we can to treat our filmmakers, bands, audience, volunteers, staff, neighbors and partners the right way,” he says. “That makes a really big difference to everyone who is a part of the events and the organization, and I think our audience can sense that when they step out onto the roof.”