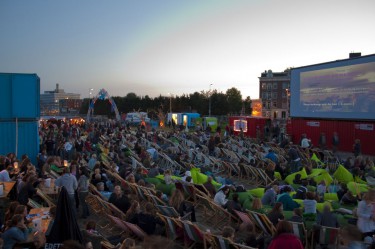 I first met Caspar Sonnen last November while covering the International Documentary Film Festival Amsterdam, where he serves as New Media Coordinator and launched IDFA DocLab three years ago. I was new in town and hadn’t heard about Pluk de Nacht, Amsterdam’s annual answer to NYC’s Rooftop Films, founded eight years ago by its current artistic directors Sonnen and Jurriaan Esmeijer, and its managing director Henne Verhoef. So when I returned to The Netherlands for the summer I decided to contact Sonnen to learn more.

The indie spirit-driven curator was kind enough to take me to coffee, and then generously suggested that I stop by the festival grounds for a communal dinner so I could meet the tireless team who were drilling and building and otherwise constructing the set in preparation for opening night the following week. So that’s how I found myself dining on a very untraditional meal of Spanish rice and beans the next evening on Amsterdam’s beautiful and fast-gentrifying harbor (not unlike NYC’s Red Hook neighborhood), chatting nonstop with festival coordinator Erwin Verbruggen, a native of Antwerp and the only other non-Dutchie onsite. And here’s just some of what the enthusiastic Belgian had to say about this under-the-stars labor of love.

Filmmaker: So what’s the selection process like? Can filmmakers send you their work or is it invitation only?

Erwin Verbruggen: We have an entry form on the website where people can send in their work. Pluk de Nacht is highly focused on young talent who make works of a decisive quality who haven’t found their way into existing platforms yet. Besides that, we’re a highly selective bunch that scours along the verge of all those platforms to see what didn’t make it into the regular distribution chain. It’s interesting to see those processes at work – what gets picked up and why – and how they change over time. Pluk de Nacht is a volunteer organization, which means that many hands make a lot of hard work light. While the programming team scours the film festivals, everybody who helps out at the festival has a dramatic love for film and keeps their eyes open for titles that would work in our particular open-air set-up.

Filmmaker: I’ve been covering NYC’s Rooftop Films for quite some time now. That festival has been around for over a decade, and it’s a sprawling event that takes place at different outdoor locations throughout the boroughs and lasts the entire summer (and then some since they’ve expanded internationally). Did you take your inspiration from them? I noticed that last year you screened Ben Steinbauer’s Winnebago Man, which Rooftop championed early on. Caspar mentioned that Pluk de Nacht and Rooftop certainly stay in touch with one another.

Verbruggen: I wasn’t around when all this started, but I believe that there’s a kinship in that both festivals in their own rhythm discovered that cities are great places to find unused spaces where you can set up your own little venue — which doesn’t need to be indoors — and that allow for a situation outside of the existing projects that are more focused on sales than on content.

Filmmaker: Which reminds me that unlike Rooftop Films all your events are free to attend. So where do you get funding from?

Verbruggen: Pluk de Nacht is a volunteer organization. Many of those in the core team work in cultural organizations and use the festival as an outlet for their own little pet projects or loves too far out to bring to their regular work. It’s a pretty serious hobby, I’d say, in which some people take a little bath and move on to the next project, and others stick around and find out what they love doing within the festival’s structure. Funding comes from project subsidies & grants, sponsors and bar gains. This year, due to shrinking budgets available for culture in the region, we made our first steps into crowd funding. We wish to remain free and keep our screenings free of charge, but do like to tap into the generosity of an audience that has grown a firm bond with the festival. Lots of people like what we do and how we do it and wouldn’t mind supporting us financially, while for others a set entry fee would lessen the chance for them to see something less usual.

Filmmaker: But you also seem to include a great deal of other cultural happenings surrounding the cinema. There’s art installations, DJs spinning music, food and drinks, workshops, debates, a daily newsletter, campfires — and last year you even had a crying competition. Caspar actually just introduced me to the biologist turned filmmaker who will be “bird-izing” attendees this year. How do you go about programming this eclectic component?

Verbruggen: The non-cinematic content is exactly what makes the festival what it is. By bringing the feature films out into the open and setting them in an environment that vibrates with life, with art, with interaction, we attract bigger crowds, people that would otherwise not make it to tiny art-house screenings. But the movement is heading into the other direction as well: by programming art and craziness, we get film lovers in touch with that “other” world. We all come from a highly cinematic background, so it’s always an experiment to tap into those newer sources. But besides a vast network of people loving creativity, we wouldn’t be anywhere without the online library called the Internet. In a sense, we’re a very networked festival. Through the web, of course, but more so through the people and faces we get a chance to work with.