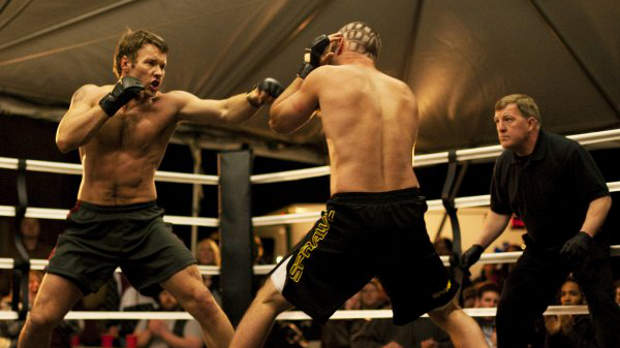 Actor, writer, and director Joel Edgerton (pictured) has a lot on his plate. He stars in Gavin O’Connor’s Warrior, which opens today, and in Baz Lurhmann’s The Great Gatsby, which is currently in production in Australia. Edgerton is also managing to develop a new film that he has written and is set to direct. He sat down with me to talk about Blue Tongue Films, the production company that he formed with his brother, Nash Edgerton, and four other mates, and how they all manage to keep the process fun.

Filmmaker: How did you and your brother get started in stunt doubling and acting, respectively?

Edgerton: Nash and I grew up in a town called Dural. It was a semi-rural town, we didn’t really know much about the film business. As it turned out the year I left high school, I went off to audition for a drama school and Nash had done a year of University and was quitting because he met a guy who was a stunt man. And when Nash heard the word ‘stunt man’, it was like a revelation to him. Because he thought that stunt people were like circus people, like you had to be born into the business. So he sort of secretly started the plans to quit college and become a stunt man at the same year I was shipping off to do drama school. It completely took all the pressure off me from our parents. They were less worried about me being an actor than him dying from falling off a building.

Filmmaker: When did the two of you decide to create your own projects and form a collective?

Edgerton: Cut to three years later, I left drama school and Nash was still rigging and carrying equipment and he couldn’t get the jobs that he wanted and I had only been trying to work on the stage. Both of us wanted to be in the movies. I had been to drama school with a guy named Kieran Darcy-Smith, and we had moved into a house together. I asked him if he’d want to write something because he was interested in writing. He would go to the book-shop and read all these books on how to make movies because he couldn’t afford to buy them, so he would sit in the book-shop and read them cover to cover. So Kieran wrote a short film called Loaded that he and Nash directed.

The film is half of a stunt film and half of an acting scene. The whole idea was that we would make something that would allow Kieran and I to get jobs as actors and Nash to get work as a stunt person. What we didn’t expect is that it would actually make us really like making movies. We would read each other’s scripts and we would talk about plans for the future. Blue Tongue, the title of the company, is the name of an Australian lizard. The lizard has a bright blue tongue. It’s kind of a cheeky kind nod to the fact that our films are filled with expletives and violence. That’s how it all started. Then by five or six years ago, we had the top floor of a building, with offices for people to write in. So we were a bona fide production company, still without any eye on any kind of profit. David Michôd, who made Animal Kingdom, he was editing a film magazine downstairs called Independent Filmmaker Magazine, now called Inside Film. Nash and him got to know each other and we were all hanging out together and this guy Luke Doolan, who had been cutting all our stuff for ages, he’d been around since he was 18, 10 years ago, and also Spencer Susser who lives here in L.A. and had been friends with us since the year 2000. So Nash at some point was like, “We’re all working together, we’re all doing stuff together, we might as well invite these guys to be part of the whole thing”. So, now there’re six of us.

Filmmaker: It seems like a nice way to take control over what you want to do.

Edgerton: It feels nice that it’s never been a profit thing and you know we’ve had a few really disorganized club house meetings over the years, where we’ll all get together, usually over a Thai meal, and there’s always been this spirit of not formalizing things too much because it works just perfectly the way it is and nobody wants it to end.

Filmmaker: I want to ask you about The Square. You wrote it and your brother directed it, how did the two of you come to collaborate on that film?

Edgerton: Nash and I were initially going to make another film which was a crime caper film, a film with a slightly more goofy tone than The Square. It felt like we were trying to make a bigger movie from the outside in, like we were building it the wrong way around. On the side, I’d been writing The Square, and at some point when this other script wasn’t working, I said to Nash that he should read it. So we switched projects and decided to make The Square. That was the script that helped me to learn to even start to write. At some point I hit a bit of a wall and we got a writer named Matt Dabner involved, who is incredible at what I call re-packing the lunch box, it’s like I had all the ingredients there and he helped me rearrange things.

Filmmaker: He got the zip lock baggies out for the sandwiches?

Edgerton: The director, Gavin O’Conner, has done a pretty remarkable job. I love the movie so much. I watch most of my movies only twice. I’ll watch it once and years and years will go by and I’ll watch it again. But, put Warrior on a loop and I’ll watch it over and over again. It’s very hard to just watch a movie that you are in relate to it as any other film but there’s something really great about Warrior and I kind of forget that I’m in the movie. It was definitely the hardest I’ve ever worked. Edgerton: Gavin’s not a real 9 to 5 kind of guy. He works outside the framework of the days that we’re shooting. His doors are always open and he’s constantly engaged in conversation and he’ll rehearse on weekends. And that whole complete submersive kind of dedication goes all the way through to delivering the movie. I guarantee he’s in Malibu right now thinking about publicity strategies and all that sort of stuff. He cares that much.

Filmmaker: As a director, he has this attention to the realism of the sport.

Edgerton: It’s not just the movies that he’s done that involve sport, I think, the depiction of the New York police department in Pride and Glory seems to me to have been the most real depiction I have ever seen on film. He strives to create the world so completely that you see the world outside of the frames as well. From my experience on Warrior, I know one of the ways he does it. He makes really good, tasteful decisions as to who he involves on the project. For example, in Warrior, the guy who plays our referee is a real UFC referee. The people who play the pay-per-view cameramen are real pay-per-view cameramen. He feels like, “If we’re going to recreate this world, why fake it?” The guys we fight in the movie are all UFC fighters.

Filmmaker: How was working with the fighters?

Edgerton: Great. The fighters are incredible. It was a good lesson in judgment, not that I completely judged the sport, but I didn’t have much understanding of it and I kind of saw it as a fairly brutal thing. It is that as well, but I really saw all the dimensions of that sport and the dedication. The way these guys handle the sport as a completely holistic experience. Everything in their life is pointed towards what they are doing in their sport.

Filmmaker: When you have an intense acting experience is it nice to jump back into a writing project?

Edgerton: Yes. I’m thankful that I enjoy writing and I have an opportunity to do it because I feel like it helps me when I’m on the set as an actor. I think that’s it’s all about story telling. There’s something really delectable about being a writer that allows you to be completely the sole creative for at least a small amount of time until those other people come in and tell you what’s wrong with it. To create the world and all the characters and to have the imagination that allows you to be completely free.

Filmmaker: Can you tell me about that?

Edgerton: I’m writing a project about what happens if the people you treated really meanly at school somehow cross your path again later in life. It’s about a group of grown-ups who are faced with their own selves as children and how they relate to each other 20 years after school.

Filmmaker: Was this idea born out of an experience you had at school?

Filmmaker: This is a film that you are going to direct yourself?

Edgerton: Yes, which is frightening to me. I mean it’s as exciting as it is frightening. But I think if I’m not frightened by it, I shouldn’t be doing it anyway.

Filmmaker: I think that’s true. I think the best things you do should be terrifying.

Edgerton: It definitely gets me more excited than a lot of stuff. Look, I love being an actor, but when I’m writing stuff, that’s the stuff that’s fills my head as I’m walking around. I wouldn’t call myself A.D.D. or too high frequency but I have become a bit of a workaholic, as opposed to my 20s, which were all about surfing.

Filmmaker: What else is on the horizon for you as an actor?

Edgerton: I’m going off to do The Great Gatsby, directed by Baz Luhrmann.

Edgerton: I made a joke to someone the other day that suddenly in the last few years I’ve been put in position to really get in there and fuck up the American classics. I had the chance to do Streetcar on stage and now The Great Gatsby.

Filmmaker: When do you start shooting?

Edgerton: I start in the middle of September.

Filmmaker: Where is that shoot?

Edgerton: In Sydney. I can’t wait. I love Baz and he’s got a great cast together. It’s going to be weird, I spend so much more time here [in Los Angeles], now. I was in Sydney and flew all the way to New York to meet Baz, and got a job that is literally a five-minute walk from where I was in Sydney.