Five Questions with The Forgiveness of Blood Director Joshua Marston 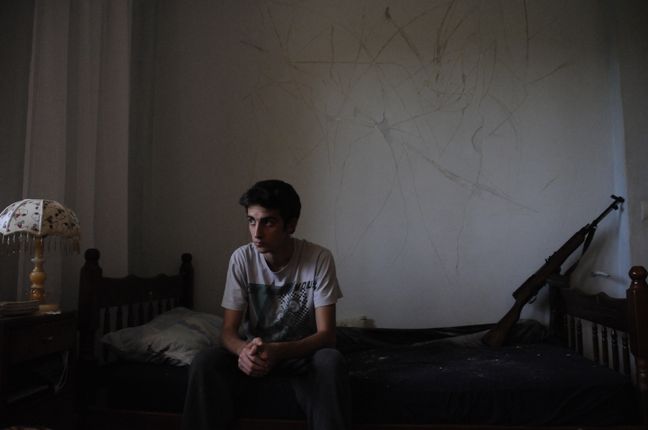 This year in Berlin, seven years after his debut feature, Maria Full of Grace, premiered at Sundance, New York-based writer/director Joshua Marston unveiled his follow-up, The Forgiveness of Blood. Winner of the festival’s Screenplay Award (for Marston and Andamion Murataj’s script), the film sends Marston from the Colombia of Maria to a village in Albania, where local traditions include the protection of family honor through blood feuds. Marston focuses on a teenage boy who is collateral damage in one of these disputes, unable to leave his home for fear of being killed for his father’s dispute. We asked Marston about blood feuds and honor killings, working abroad, and the long gap between his features.
Filmmaker: What interested you in the subject of honor killings?

Marston: What fascinated me most about Albania, from the start, was that it’s a country in transition and thus full of interesting contrasts and contradictions. I was surprised to discover that in a place with cell phones and Facebook blood feuds still go on. Families live stuck inside their houses for years on end. Aside from being a dramatic story, the film is a complicated examination of people grappling with the pull of a deeply rooted tradition versus the desire to modernize. So for me, looking outward –- even to northern Albania –- becomes a way of looking inward, at universal questions like how we carry forward old traditions into new times, and what it means for young people to grow up in the face of a widening generation gap.

Filmmaker: In developing your script, did you draw from specific news accounts, or more from your own imagination? What role did research play?

Marston: The script is rooted in a very intense month of research, spent driving through northern Albania with a fixer (a filmmaker who would go on to become my co-writer and co-producer) and an incredibly loquacious driver (a guy who normally drove for an Assemblyman and had a talent for making conversation with everyone). Together we sat in the homes of families who are mired in blood feuds. We interviewed mediators who shuttle back and forth between the families negotiating peace. We talked to teachers who home school kids who can’t leave the house for fear of reprisals. And of course, we spoke with all sorts of Albanians about normal life completely apart from blood feuds. By the time we returned to New York, my now-co-writer and I had a detailed outline for the story which we then turned into a first draft of the script. That screenplay continued to evolve as I learned more and more about Albania – during the auditions of 3,000 teenagers, for example.

Filmmaker: Tell us about your crew. Was it a blend of Americans and Albanians? And what were the essential differences in working between the two film cultures?

Marston: There is a small film industry in the country that produces about two feature films a year; and there are two film schools in the capital. Nevertheless, we always knew we would have to bring some crew from outside Albania. Even Albanian productions tend to bring in directors of photography, for example. Always, with every position, we asked, Is their someone local who can do this job? That was because we wanted the film to be genuinely Albanian, not only in its end product but in its making. One of the plusses is that wherever we found capable people who had the gumption to step up we brought them into the fold. That meant that there was a real excitement and curiosity on set because people – Albanians and non-Albanians alike – were learning all the time. So, it was a great collaboration.

Filmmaker: It’s been several years since Maria, Full of Grace. What were the circumstances that led to this being your next film as opposed to a U.S.-based project?

Marston: People tend to ask now, Are you only going make films abroad in foreign languages? Sure I love doing that, but there were plenty of other films — about American characters — that were supposed to happen after Maria. There was a script I wrote for Warner Independent about American truck drivers who work in Iraq for Halliburton. That script didn’t get made because the studio wanted to convince a major movie star to work for no money and spend several months shooting in the Middle East. I also tried to make an adaptation of Jonathan Lethem’s The Fortress of Solitude but that was just as the economy was beginning to collapse. So, this new film in Albania is partly a response to those frustrations. My producer, Paul Mezey, and I knew that we could get this made for very little money and that once we were off and running with research we were going to carry straight through to production. We started with some grants (Cinereach, NYSCA, Goteborg Film Festival Film Fund) and then looked for financing in Europe (because it’s a European story). This film was very much about taking back control of the process, not waiting around for large studios to give us permission.

Filmmaker: There have been several thrillers of late dealing with the challenges faced by protagonists in constricted spaces. To what extent do you consider your film a thriller, and what were the visual and narrative challenges of making a film about someone imprisoned in their own house?

Marston: The reality of blood feud confinement is that people start off barricaded inside, staying away from windows. Then, over time, they allow themselves to move a little more freely, maybe venturing onto the porch or into the garden. Simply staying true to that reality provided the tension. When people watch the film they describe being constantly on edge. Every window and every open door creates a potential threat. So the delineation of inside/outside, the shifting boundary that encircles the characters works narratively, visually and thematically, and it also serves to keep the audience on the edge of their seat. At its most fundamental, this is a film about characters who are obliged to stay inside (though they don’t always obey that). So, the house becomes a character in itself. It has an old section and a new section and a second floor that’s still under construction. Partly this was interesting to me because the combination of old and new is inherent to Albania and to the themes of the film. But also it was useful because it gave us lots of opportunities in playing the space.