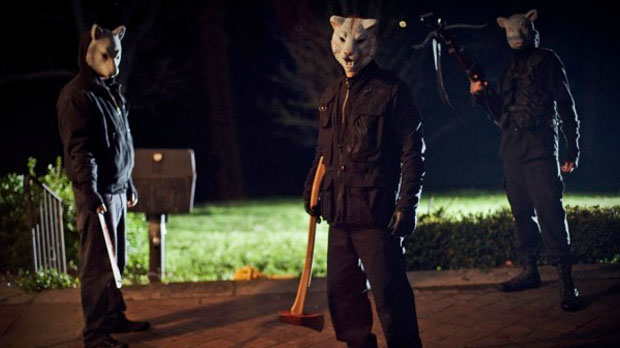 With his features Home Sick, Pop Skull and A Horrible Way to Die, Adam Wingard is carving out a reputation as one of the most imaginative and visually sophisticated directors working in modern horror. His films are mindful of genre conventions, finding ways to subvert them through unexpected characterizations that have real psychological depth. His latest movie reinvents the home invasion thriller. We spoke to Wingard about blood, style and directing other directors.

Filmmaker: Your previous film, A Horrible Way to Die, tweaked the serial killer genre by setting it within the world of addiction and recovery, and exploring those emotional dynamics. Your new film takes up the “family under siege in their home” genre. What sort of twists have you incorporated this time?

Wingard: I think it’s always best when approaching a specific sub-genre to imagine what do I not like about what these movies do. When [writer] Simon [Barrett] and I asked that question about home invasion films we both concluded that there seemed to be too often an emphasis on simply punishing characters with pain, murder, and rape. The horror world has been totally sodomized by shocking scenarios, and we decided to make ours more of a fun ride, one that doesn’t punish its audience or take itself too seriously.

Filmmaker: What’s the secret to depicting intense violence without creeping out your cast and crew? Or, do you like to creep them out?

Wingard: Anyone that has to get bloody and wear appliances knows they have my sympathy. I hate asking someone to do something I would never want to do. Sticky things freak me out. As a matter of fact I hate everything about fake blood, the way it smells, the way it slimes around and sticks to things. I wish CG blood was better so I wouldn’t even have to associate myself with it, but such is the way things are. Unfortunately I like things of a certain quality these days and I would hate to rely solely on VFX to take care of gore; however they have contributed a few times in You’re Next to sweeten a few shots.

Filmmaker: Your new film features as actors the directors Ti West and Joe Swanberg. What’s it like to direct other directors?

Wingard: It’s great; they both know what a pain in the ass making a movie can be so I felt a lot of empathy from them when the scenes were getting rough. I’ve worked with Joe a few times now and we have a psychic rapport. People are going to be totally blown away when they see him in You’re Next. He gives one of the best performances I’ve ever filmed.

Filmmaker: How do you think you’ve evolved your work visually since Pop Skull? That film has a somewhat extreme visual and editing style, and so does A Horrible Way to Die, but in a different way. And what can people expect when it comes to the visual approach of You’re Next?

Wingard: Pop Skull and A Horrible Way to Die are very much companion pieces to each other both thematically and stylistically. On both pictures I was exploring the dark sides of romantic obsession and drug addiction wrapped into a sort of alternative take on specific subgenres. I was very much exploring my style within the confines of the low budget. With You’re Next I set out from the get go to make a real movie in the conventional sense. For the first time ever I had enough money to realize a fuller vision and to finally make a movie that I would have loved to watch when I was 17. That’s kind of the best way to gauge how true you are being to yourself and your personal vision.

Filmmaker: You seem to be in an accelerating period of production activity. To what do you owe this too, and what advice do you have for filmmakers trying to be more productive?

Wingard: I started working nonstop because I just wanted to improve and explore all facets of filmmaking before I was ready to hit the big leagues. The only thing worth a damn is experience — without it you can’t truly understand what to do. You might make a hundred crappy movies but as long as you can leave your ego behind and strive to evolve constantly and learn from your mistakes you will eventually start to make the right decisions which lead to magic. This is a mysterious game that can only be played with personal power, which comes from the knowledge of experience.