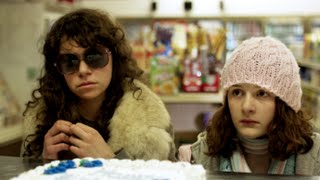 Casting the central role of Ruby was really tough. In my mind Ruby was a scary mix of too young and too sexy, even in her appearance. I wanted to create a tension and innocence of youth conflicting with too much skin. I wanted someone from Newfoundland, someone wild, messy, damaged and young. I wanted her to have physical flaws, like maybe not perfect teeth, something physical that would put a definite wall between herself and her dreams of stardom. Shawn loved Tatiana and wanted her to play the role, but I met her. She was none of those things. She was from the Prairies; she was beautiful, older than the character and very together as a person. Because I was dealing with issues of underage sexuality I was worried about casting someone who looked old enough to handle herself in the situations I was about to throw her in. This was when Tatiana kind of taught me what acting was. She owned the character the minute she auditioned. Ruby became someone new. A collaboration between myself and Tatiana. Tatiana brought an effervescence that I didn’t think about. She gave levity to the tragedy of the film and a playfulness to the sexuality that actually ended up creating more tension, perhaps, than an audience would experience watching a messed-up girl just get more messed up. This, in retrospect, would have been pretty bleak. I actually had to really think about this question because the film is a product of a million decisions all tangled up together. It is terrifying now to look back and extract one from the mix. I shudder to think of the movie without Tatiana in that role.