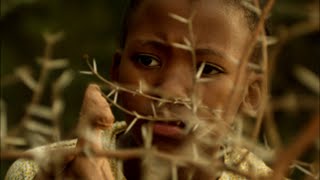 Never a truer word. We had a scene — it was my favorite in the film. It was one of those scenes which didn’t necessarily drive the film on a plot level but was essential to the feel and the magic. Like everything, it was shot in a huge rush. When it came to the editing, we tried everything to make it work, but eventually we had to admit: It was bad. There was no way the scene was going to cut it. There was no way I could afford a reshoot; it was a scene with lots of extras (part of the reason it failed in the first place), and the camera rerental alone meant it was impossible. Without it there, the film played, but there was definitely something missing. So I sat and thought — tears of frustration drying in my eyes — what could I replace it with? It had to be something that cost no money and which I could do myself (as it was at that stage of postproduction where everyone has abandoned you. Except, if you’re lucky, your editor). And then it hit me: animation. Sand animation to be precise. Had I done sand animation before? Okay no, but really, I couldn’t think of anything else. I’m never sure exactly where ideas come from, but in this case I know: from the depths of pure terror and desperation. How sand animation fits in with the film is a long story, but believe me, it did. I tried to construct a sequence that would have the same impact as the original live action scene. It became more and more simplified as I realized the potential difficulties of the medium. But what we ended up with is one of my own and, dare I say, other’s favorite moments in the film.