by Madeleine Sackler
in Filmmaking
on Sep 22, 2011

My name is Madeleine Sackler, and I’ll be blogging on my first time bringing a film to IFW’s Spotlight on Documentaries. I’m looking forward to seeing how the week goes! For now, a little on the film.

Unstable Elements is my second feature, and it’s been an entirely different experience than any film I’ve worked on in the past. Of course, every documentary is different, which is one of the reasons I love what I do, but this has been a particularly challenging process. Unstable Elements tracks an underground resistance group called the Belarus Free Theater, which exposes problems with the violent Belarusian dictator, Alexander Lukashenko. Because Belarus is censored, the government does not recognize the Free Theater – they can’t sell tickets, rent a space, or openly promote their work – and they are also hounded by the KGB. Yes, in Belarus the special police force is still called the KGB. Most members of the theater have lost their state jobs, and all have been imprisoned. 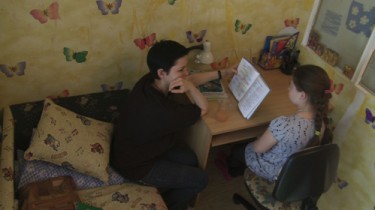 For us, this makes the filmmaking process very difficult, and we have had to find Belarusian cinematographers willing to film underground in Belarus. As a result, we work long-distance over Skype with translators, which has been quite an adventure. Fortunately, we have been able to smuggle about a terabyte of footage out of the country, and we now have mountains of beautiful verite footage of the actors’ lives in Belarus. Above is a picture of Yana, one of the actors, helping her daughter Marta with her homework.

We just wrapped production two weeks ago, and are now working to translate all of the footage. We will start cutting full time early next year.

Now, off to the first event for Spotlight on Docs! I’ll be back in a few days with thoughts on the first day of meetings.