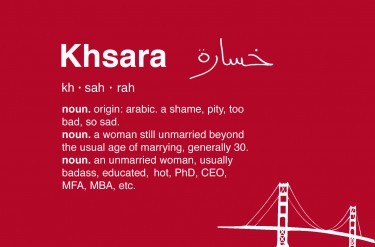 I’m sitting in seat 8A on a flight from San Francisco back to N.Y. in anticipation of the Emerging VisionS event tomorrow. The last weeks have been a whirlwind, the good kind where the pieces start to fall into place and momentum starts to build.  My film Khsara, a comedy about Arab women who don’t get married in time, was conceived a few years ago. Since then I have been writing draft after draft thankfully with the support of fine organizations like IFP. After the non-stop No Borders week, I flew to San Francisco where my film takes place and followed up with some really great meetings. A year ago at this time it would have been hard to imagine this but I am so honored and to be among such an inspired and vibrant group of filmmakers.

When I found out my mentor is Alex Orlovsky of Blue Valentine I was so thrilled. I was late to see the film due to a combination of being out of the country for much of the last few years and a hope that Netflix would add it to the instant line up Nonetheless, I finally cozied up to this film that I had only heard good things about. Hearing too many good things about a film isn’t always a good thing, as you probably already know. But my expectations were exceeded and I loved how the true moments were allowed to live and breathe.  Such a careful execution and alchemy of characters and story kept me in my seat a few more hours to watch the behind the scenes. Am I the only dork out there that watches those? I shot the behind the scenes video for Circumstance and found the process fascinating, so when I love a film, I want to know everything I can about how it happened. And as many of you I’m sure have experienced the process of making the film is one thing and the film is another. I thought Blue Valentine used such a great prep tool to have the main characters live together for a month during production to create a very authentic family feel. I loved how they used real movers from the Stienway Moving company in Queens for one of my favorite scenes when they moved an old man to his new home in a retirement home.

The day after my Blue Valentine session I was working near Union Square and walked out onto the street and recognized a familiar face. I looked up and saw the same Steinway company van I had seen on my screen the night before. A kind man smiled back at me and I asked him if he was in Blue Valentine. He nodded yes, we chatted for a minute and he went on with his heavy lifting, I with my meander to the train.

I love when the world syncs.

I’m set to meet with Alex at a later time so I feel blessed to have two mentors and to work with producer Anne Carey tomorrow. She already reached out to me and her track record is amazing so I feel like I’m in very good hands.

I fell down the stairs yesterday, that is good luck right? They were hard wood and shallow. I had socks on and was moving too fast for my own good. My dear friend was right there with love and Neosporin. Slow down and take it in.  Tomorrow, I am ready to listen.