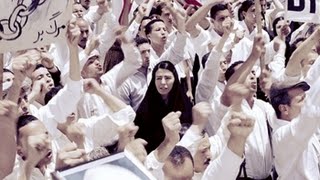 Women Without Men was my first feature-length film, so numerous challenges had to be faced throughout the process of its making. First of all I’m a visual artist — a photographer and a video artist — so I had never written a script or had worked with a producer, professional actors, or a large crew before. Also the film was based on a well-known novel by Iranian author Shahrnush Parsipur. This novel was written in a style of magic realism, an extremely difficult piece of literature to readapt into a film. The narrative follows four main characters simultaneously as they each struggle through personal crisis and seek freedom and independence. Meanwhile, unlike the novel, I expanded the political dimension of the film and showed how the country of Iran too struggled at the time for an idea of freedom and democracy against foreign and local dictators (during the CIA organized Coup of Summer 1953). So the difficulty remained in how to find the right balance between a political story and a personal narrative of four women; how to raise deeply poetic, philosophical and timeless issues while exploring important political and historical issues that belonged to a specific country; how to make art through every single frame and conceptual approach while respecting the cinematic language and its conventional way of storytelling. At last, after taking several years of careful study and preparation in script writing, production and postproduction, I believe I delivered a film that although not at all flawless suggests the best balance I could find and offer to the world in between the wonderful properties of the novel and my own artistic sensibilities.