Margaret — A Hammer to Nail Review

(Without any fanfare, Margaret was released theatrically by Fox Searchlight on Friday, September 30, 2011. Visit the film’s official website to learn more.)

Oh boy. Oh wow. If your idea of a rewarding time at the movies is a symphonic drama that aches with the blood, sweat and tears of real life while simultaneously upholding the finest traditions of opera, of theater, of poetry, of literature, look no further than Kenneth Lonergan’s Margaret. Much has been written about the unfortunate legal brouhaha surrounding the film’s post-production — it was shot in 2005 while here we are twiddling our thumbs in late 2011 — and though no one seems able to definitively say whose cut of the film this 149-minute theatrical version is (for what it’s worth, the film print has a 2008 copyright), that honestly doesn’t matter. Margaret is superior cinema any way you look at it.

Lonergan kicks off his dramatic opus with an opening credits sequence that paints New York City in a somberly triumphant light: in super slow-motion, everyday New Yorkers make their way to wherever it is they are going — work, school, brunch, home — as composer Nico Muhly’s rueful theme rises. These images are captured with a grainy, bleached out beauty by cinematographer Ryszard Lenczewski, a textured, lived-in look that Lonergan and Lenczewski carry throughout the film.

The story is centered around Anna Paquin’s Lisa, an Upper West Side teenager whose life is privileged, though far from perfect. An idealistic, hypersensitive girl who is coming to terms with her budding sexual power, Lisa can’t seem to have a conversation with her mother Joan (J. Smith-Cameron) — an especially busy Off Broadway actress — without getting into an argument. After school one day — a private school she attends on a half-scholarship — Lisa accidentally plays a role in a freak bus accident that takes a woman’s life (this scene is played out in what feels like real time and nails the strange blend of horror, drama, and humor that is specific to tragedies such as these). In a moment of perceived mercy towards the bus driver (an always committed Mark Ruffalo), Lisa tells the authorities that the stoplight was green, when she in fact knew it was red. In the following days, weeks, and months, Lisa struggles to put this incident behind her, but her guilty conscience won’t let it rest, spurring a serious of well-intentioned but misguided acts of attempted redemption. 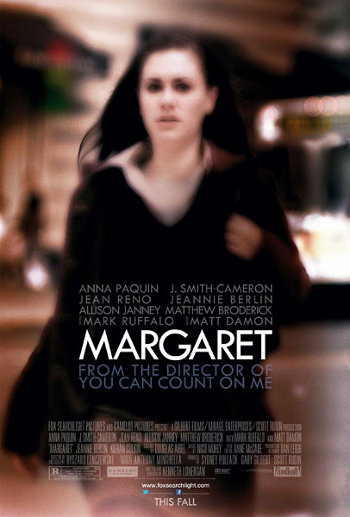 If that storyline were Lonergan’s sole focus, it would be worthy of a feature film on its own (albeit a 90ish-minute one). Instead, he uses that as the base canvas from which to explore enough topics, themes, and emotions to stuff a 500-page Great American Novel. Single parenting, aging, teen sexuality, grief, guilt, not to mention 9/11-related PTSD — Margaret feels like a movie made by someone who was told that they were never going to be allowed to direct again and so they became determined to say everything in one fell swoop. If You Can Count on Me was Lonergan’s Dubliners, Margaret is his Portrait of the Artist.

Great directing comes in many different forms, but there is one trait that separates the masters from the regular old pros: the ability to create situations that feel like unscripted outtakes from everyday life but which have the heightened power of pure movie drama. Though his creative career first blossomed in the theater, it’s Lonergan’s attention to detail with regards to location and atmosphere that mark him as a filmmaker of a rare, special breed. Take, for instance, the scene when Lisa and her mother go to the opera at the Met. Many movies capture what it feels like to watch an opera at the Met, but here, you get a sense of what it feels like to be at the Met. The same goes for Lisa’s visit to Bay Ridge to confront the bus driver. When she gets off the train and wanders down the street in search of her destination with the Verrazano-Narrows Bridge lurking in the background, the authority of the location grounds the plot machinations into something wholly credible. Because of this, even in its most unconvincing moments, Margaret feels true.

Many will likely try to pin some of the film’s seemingly abrupt edits on the post-production fiasco — the credited editor is Anne McCabe, though reportedly Martin Scorsese and Thelma Schoonmaker, as well as Dylan Tichenor, had a go at it — but to my eyes, these cuts all come off as calculated creative ways to imply more by showing less. A perfect example of this is after Lisa has curtly told her charming suitor Darren (a great John Gallagher Jr.) that she doesn’t feel like talking to him on the phone. They hang up, and we catch a quick glimpse of Darren bawling like a heartbroken baby. Mission accomplished, no need to linger. A wealth of familiar sorrow is conveyed in that one flash of a moment.

Had Margaret come out when it was shot, back in 2005, as the reverberations of September 11th continued to fray New Yorker’s nerves (both consciously and unconsciously), it would have been impossible to view the film through any other prism. It isn’t just the presence of a mid-aughts Anna Paquin that links this film to Spike Lee’s 25th Hour. Though superficially quite different, these films nonetheless share a similar bruised post-9/11 soul. Even in 2011, it’s impossible to detach Margaret from the present tense in which it was shot, yet the real truth is that New Yorkers have always had frayed nerves. They are built into the city’s nervous system. Margaret is as accurate and honest a picture of modern New York City as I have seen. While it might not factor every neighborhood, every borough, and every demographic into the mix, it is faithful to the characters and communities that it depicts.

Nine hundred words, and I feel like I haven’t even begun. There’s Lonergan’s inclusion of opera and poetry to enrich his film’s themes (including Gerard Manley Hopkins’ poem “Spring and Fall,” which inspired the title), the excellent supporting cast assembled (superstars like Matt Damon, Matthew Broderick, Jean Reno, but even more strikingly, Jeannie Berlin, Kieran Culkin, and whoever the actor is who plays the police detective that shows mercy on Lisa!), the complicated emotional pyrotechnics on display, and so, so much more. Each of these elements deserves its own chapter in a book. For now, what really matters is that you should ignore all the behind-the-scenes chatter about Margaret‘s production and focus on the film itself. It is a massive, sprawling work of art.