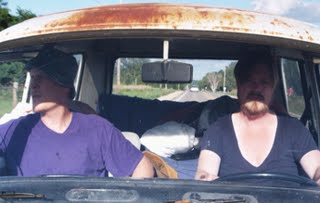 Decisions, decisions. I was practically penniless again and semihomeless after finishing my last film, Great Speeches from a Dying World (ironically enough a film about homeless people) when I decided to start on Bass Ackwards. Not the best time to make a movie, one could argue. So…why? Well, I like to make movies and I have things to say, and because my friend, Todd Rohal, sent me a link to a Craigslist ad for a “strange van.” Of course, I bought the van and started writing a story. Todd and I toyed with the idea of us being the main characters in this story until we decided that our humor and chemistry wouldn’t be the right fit for where I was heading tonally and storywise. So I had to decide if I should make a film although I didn’t have another male lead. After deciding that we owed it to the footage we already shot, I called my friend Jim to come on board at the last minute. We did amazingly well for only a 10-day shoot on the road. We obviously didn’t have enough time to get everything I felt the story needed. Another difficult decision I faced was waiting until I was able to shoot for a few more weeks, which didn’t end up happening until almost 13 months after I originally started filming. It was very hard to keep my love for the story alive all that time and to keep my faith that it would ever happen while waiting for other people’s (who we weren’t paying) schedules to open up. It was also difficult to turn down other jobs just to be free and worrying whether my hair would even match since we had no continuity or hair-and-makeup person. Anyway, enough complaining, every film seems to take a certain emotional toll on me, and each one usually isn’t clear when I first decide to begin. But that’s how life works, too. And it’s often that personal struggle that is inextricably tied to the emotional struggle in the story of the film. Although things sometimes can get miserable, I wouldn’t have it any other way.