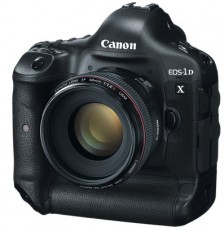 Get ready for the next round of DSLRs — Canon has just announced their EOS-1D X. From Engadget:

Stick a piece of gaffer tape over the unmistakable X, and Canon’s latest EOS-1D pro-level camera will look virtually identical to every 1D model that came before it. But once you flip up the power slider, this new king of the jungle will hum like no other. Canon’s phenomenally powerful EOS-1D X really sounds like the DSLR to rule them all. Its 18 megapixel full-frame sensor uses oversized pixels to battle noise and is supported by a pair of Digic 5+ imaging processors, which also help drive a 61-point high density reticular AF system, a top ISO setting of 204,000 (51,200 native), a 252-zone metering system, a 14 fps JPEG (or 12 fps RAW) burst mode and a built-in wired gigabit LAN connection, for remote shooting and image transfer.

Over at Planet 5D, there’s a summary of a conversation with Canon’s Chuck Westfall that has some additional details:

Video is here to stay in the HDSLRs and unless Canon is saving some amazing features for the 5D3 (which we all know is coming but we don’t yet have a clue as to the date (and neither do I), the video improvements in the 1DX are significant, but those expecting the next generation with huge advancements are somewhat disappointed. There’s no RAW video, no incredible frame rates above 60, etc. And we don’t know whether any of those are even coming in the next generation of video camera we expect to be announced in 2 weeks.

With the 1D X we did get many advancements including the removal of the 12 minute recording time. I found it interesting that we did finally get real clarification from Canon that indeed the main reason for limiting recording time to under 30 minutes is a taxation issue in Europe. We also know that there’s still the 4gb file limit set by the file system used on the CF cards, but Canon has implemented a system that creates new files when the first one fills up – up to the 29.59 minute time limit to get under the taxation issue. We were also told that if this camera were shooting over 30 minutes of video, the price would need to increase about 30% to cover it! So I believe that the vast majority of people needing longer shooting times will be happy with this new compromise.

Koo over at No Film School has a link round-up and comments as well, and he concludes:

The full press release is below. The 1D X is undeniably the DSLR to beat — if you account for both video and still specs — but unless you’re going to be shooting a lot of stills, I suspect for filmmakers $6,800 would be better spent on a proper video camera like a Sony FS100. However, if you make your living doing both, this looks to be the new king of the HDSLR heap.

Ditto Phillip Bloom, who likes what he’s reading about the camera, which retails, body only, for almost $7,000, but is also waiting, like many, for another announcement by Canon:

I haven’t seen any footage but cannot wait to get my hands on this. No matter how great all these other video cameras with S35 chips are, they simply don’t have the full frame aesthetic that this camera will offer. Of course now all eyes are turned to the 5dmkIII.

This is the flagship Canon DSLR. But remember this is a camera designed to photographers first and foremost. Canon may potentially add even more features to the mkIII…