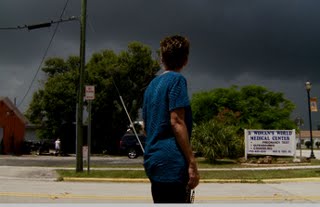 12th & Delaware takes place over one year on a single street corner in coastal Florida. On one side of the street stands an abortion clinic. On the other a pro-life operation whose single objective is to persuade women who are considering abortion to continue with the pregnancy.

We discovered these pro-life organizations (known as crisis pregnancy centers, or CPCs) while filming Jesus Camp, and to our knowledge no filmmaker had unveiled the goings-on of any of the 4,000 such places in the United States. CPCs represent the primary and most powerful strategy in today’s pro-life movement, and our intention was to shine a light on what happens inside.

We gained access to Pregnancy Care Center in Fort Pierce, Fla., and began shooting. After many months it became clear to us that the portrait of abortion and its consequences painted daily by the pro-life counselors (as well as some questionable medical information they were dispersing) begged to be countered by someone on the other side of the issue. This presented a problem. Stylistically we didn’t want to simply bring in outside experts or talking heads to push back on the methods of this crisis pregnancy center. In addition, we were telling a microcosm of a much larger issue, so we needed the specific foe of this particular crisis pregnancy center. We had to cross the street and film inside the abortion clinic.

Changing our approach late in the game forever altered 12th & Delaware. Instead of being purely a “day in the life” inside the unseen world of the pro-life movement, the film became a chronicle of the raging battle occurring between two neighbors who are locked in a bitter personal and ideological struggle. It also became evident to us that this seemingly banal intersection could serve as a metaphor for the intractable divide over abortion in this country.

Besides reimagining our film, we had to confront the very difficult task of cutting through the personal gripes of the protagonists and portraying as fairly as possible the daily realities of both sides of the street. This is the most difficult subject matter that we have delved into to date. We hope we got it right, and look forward to sharing it with audiences when we debut the film at Sundance 2010.