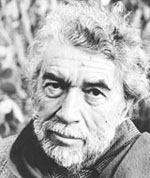 The French writer and film director Alain Robbe-Grillet died on Monday in Normandy at the age of 85. GreenCine has a round-up of various news reports and commentary here.

Robbe-Grillet was best known for his literary manifesto “For a New Novel,” his screenplay for Alain Resnais’ Last Year at Marienbad, and his various novels — The Erasers, Jealousy, The Voyeur — that formed part of the Nouveau Roman movement. As a director, his films include L’Immortelle and Trans-Europe Express. La Belle Captive was recently released in the States by Koch Lorber.

When I was in college, Robbe-Grillet’s early novels and the essays that comprised “For a New Novel” were, for all their severity, extremely seductive texts. Robbe-Grillet’s works were ostensibly anti-psychological and opposed to conventional notions of character and metaphor. His books were concerned not with feelings or “the inside” but rather surfaces and exteriors, and his essays comprised a dismissive broadside against what we believed then to still be the corrosive sway of the bourgois novel. There was something thrilling about encountering Jealousy for the first time and hitting that famous sequence in which the narrator, whose wife may be cheating on him, obsessively counts every tree in a banana forest for page after page.

At the time I first read his work, Robbe-Grillet was a visiting professor at NYU, and wile he was in New York the Mudd Club devoted a special evening to him. We showed up at the club and were blindfolded and led onto a bus which took us to what later became the East Village nightclub The World. When we arrived it was decorated like on the decaying mansions that might be found in one of his films. In the upstairs space both L’Immortelle and Last Year at Marienbad screened. I met Robbe-Grillet briefly that night and later with a friend interviewed him for the Columbia literary magazine. He claimed not to speak English so my friend, who was a French major, asked all the questions. She found him quite intimidating, though, and at one point tripped over her words. “In English,” he snapped, and she started to ask the question again. After a moment he cut her off — “Your English is worse than your French,” he said.

Robbe-Grillet’s work lost one kind of severity in later decades but gained another of sorts. He abandoned some of the conceptual rigor found in the early books but picked up an increasing fascination with kink and sado-masochism. And with his autobiography Ghosts in the Machine, he seemed to accept the notion of the psychologically defined narrative subject his earlier novels dismissed. When asked if his novels were all disguised autobiography, he told Bookforum in 2003:

It’s true for all writers. Faulkner is in all his novels. So is Flaubert. My novel Jealousy is absolutely autobiographical. I lived in that house. I have photographs of that house. I was one of the three characters in the novel. What’s strange is that this was received by critics as a novel without an author, as the most abstract of all novels. The Voyeur is set in Brittany, where I was born. The chief difference is that I did not murder a young girl. Yet the idea of doing such a thing was in me. A very famous psychoanalyst told me, “It’s a good thing that you wrote that novel, because it was your psychoanalyst couch. If you hadn’t, you might have murdered a young woman.”

A number of tributes have appeared today throughout the blogosphere. Cinebeats has this short post that includes this YouTube clip from his little-seen 1970 film Eden and After.

Glenn Kenney has an excellent post at his blog that includes this passage:

Both his novels and his films got, for lack of a better word, kinkier over the years, with plenty of bondage and fluids involved; the hideous sex murders-as-peep-shows in his novel Project for a Revolution in New York do play as violent pornography—exquisitely written violent pornography. Were Robbe-Grillet’s convoluted narrative strategies merely subterfuges to excuse what the literary critic Roger Sale called (when writing of another controversial novelist, John Hawkes) a “vile imagination”? 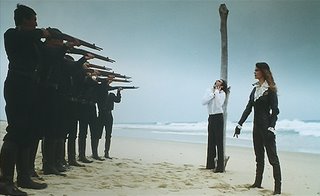 Over at Esotika Erotica Psychotica, Mike pens a brief poston the man and his films. Recently he wrote a longer appreciation of La Belle Captive (pictured).

I’ll leave you with one final YouTube clip — the trailer for Last Year at Marienbad.