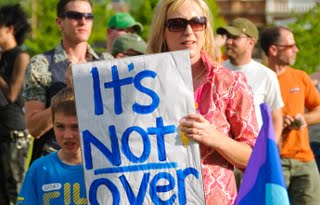 The hardest decision for me was getting well with the fact that the entire film goes up against everything I was ever taught. To not question the leader of the church of my birth. To not point a critical view in the direction of the religion I was always taught to be the ONLY true religion on the planet and the ONLY way to attain the highest level of Heaven. We are the product of our cultures, and shedding the fear that was ingrained in my psyche was not only tremendously difficult, but in the end, powerfully liberating. I began to see that it is okay to testify against the abuser, so to speak. Really, what we’re talking about is a commitment to truth and the bold telling of it. Once I made that commitment, the film came to life. Before it was a collection of echoes, if you will. Once I committed to telling the truth — all the truth — the film had one, singular voice. And it’s better because of it.