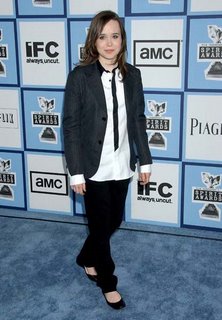 The cinematic year of the pregnant woman continued as Juno won Best Picture, Best Actress (Ellen Page, pictured), and Best First Screenplay at the Film Independent Spirit Awards this weekend while nominee Angelina Jolie, clad in a tight-fitting black dress, made gossip page news by premiering her own baby bump at the event’s red carpet. The Spirits have always managed the tricky business of blending authentic Hollywood glamour, cheeky awards-show irreverence, and sincere salute to independent film, and this year was no exception. Winners spanned the range from mega-hits like Juno to no-budget indies like Chop Shop, and the crowd consisted of the usual indie scenesters as well as the impossibly glam Jolie/Pitt, nominees Cate Blanchett, Sienna Miller (appealingly game for the jokes Wilson threw at her), and Lust, Caution’s Tang Wei, and presenters who included Maggie Cheung, Matt Dillon, Eva Mendes, Kate Beckinsale and Dustin Hoffman. The tent on the Santa Monica beach may have sprung a few leaks (like the one over my table) during the afternoon’s light rain, but this was still a smoothly run and convivial event.

Rainn Wilson took over hosting duties this year from Sarah Silverman and while I went in doubting that he’d top her, he did a great job. A series of pre-taped pieces – one in which he “got indie” by being pimped out as a tranny hooker by Dennis Hopper and the other in which he ineptly auditioned for the lead roles in the various nominated Best Films – were hilarious. There was no Ally Sheedy on-stage winner meltdown this year, but a number of the nominees got off great lines. Best First Screenplay winner Tamara Jenkins (The Savages) quipped that “half the room” had passed on her script and that her first draft was so long that agent Bart Walker suggested pitching it to HBO as a mini-series, while Philip Seymour Hoffman, winning Best Actor for the same film, said that while he normally moves right on to the next job after finishing a film he felt he gained “two sisters” on this one in director Jenkins and co-star Laura Linney. A special award, the Robert Altman Award, was given to I’m Not There’s Todd Haynes, casting director Laura Rosenthal and the actors who played Dylan in its ensemble cast. Haynes used a portion of his speech to remember Heath Ledger and was particularly moving when noting Ledger’s nascent directorial career, describing his music videos and the feature script he had only recently sent to his first two collaborators: Rosenthal and I’m Not There d.p. Ed Lachman.

The great Janusz Kaminski won Best Cinematography for The Diving Bell and the Butterfly, and both my and the other producer at my table’s ears went up when he described how he cut his rate to $3,000/week in order to accommodate the film’s budget. Good to know… Winning Best Director for the same film, Julian Schnabel faced no drunken audience heckling at this event, although he did oddly try to pay a tribute of some kind to the popularity of Juno by inviting director Jason Reitman on stage to share the award. Schnabel went on to acknowledge the importance to him of producer Jon Kilik (“I don’t make a movie without Jon Kilik,” he said,”) and then ended by saying, “This is a nice community of people who’ve been very, very generous to me, and I appreciate that.”

Neil Kopp (Old Joy, Paranoid Park), who won the Producer Award, also spoke of crew rates, saluting the crews who had worked for him for deferrals or minimum wage. And it was great to see Ellen Page, who we picked for our “25 New Faces” in 2005, win Best Actress. Ditto the Mr. Mudd producing team behind Juno. On stage producer Liane Halfon quipped that the picture was something new for them: a movie with a happy ending.

Like any collision between the big-time world of indie-film sponsorship and the often small-time world of actually making independent cinema, the Spirits have been known to produce a few off-key moments, but if there were any egregious ones on stage this year, I missed them. I did overhear talk of one such moment in line for the restroom, however, as Rocket Science director Jeffrey Blitz described one of his TV red-carpet interviews. “You directed Rocket Science, I really loved it,” the interviewer said. “So tell me, what was it liked directing a documentary this year?”