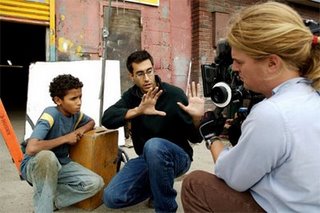 .. over at the Director Interviews.

Filmmaker: What was the process of casting like? It seems that who was playing the roles was integral to the movie’s success.

Bahrani: I learned on Push Cart that the biggest job in learning to work with the actors is casting. We were relentless on the casting: we looked for months for the kids, we saw probably 2-3,000 kids, I put 625 interviews on tape. Usually the first step is Q&A: “Who are you? Where are you from?” After you get them comfortable and you get them talking, you start asking things like, “So, have you ever stolen anything?” “No.” “Really?! You haven’t stolen anything?! Why not?” Then sometimes you’ll get, “Well, one time…” “Oh, cool. Tell me more about that.” Then you start getting into things that match the character: “Would you kill someone if they were hurting your sister?” “You wouldn’t?! You wouldn’t think about it?” Alejandro was close to that, and he and Isamar were from the same school so they already had a rapport of some sort. She had stood up for his real sister and so he already loved her and looked up to her. After that, it was just constant rehearsing.