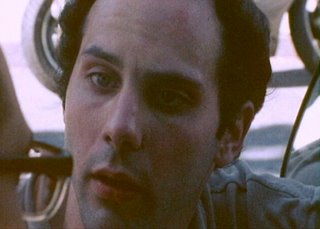 I’m posting this short review by Richard Brody that appeared in the New Yorker this week as the first of a trickle of postings, message board missives, MySpace bulletins, and FaceBook alerts that will soon develop into a deafening roar of digital noise converging towards one important goal: to get you to see Frownland this weekend in New York at its world theatrical premiere at the IFC Center!

If you’ve been following this blog over the last year, you know of our huge love for this film. I first saw it a year ago at SXSW and was on the jury that gave it a Special Jury Prize. Then, Filmmaker and Lodge Kerrigan presented it at as a one-off at the IFC that went fantastically. It sold out, people were turned away, and those who got in got off on the film’s astringent black comedy and empathetic miserabilism. In the Fall, the film was the unanimous choice of our jury selecting our “Best Film Not Playing at a Theater Near You” Gotham Award. We’re not the only ones mad about this film. It has received a Spirit Award nomination, a French theatrical deal, and praise from critics ranging from Amy Taubin to Scott Foundas to, now, The New Yorker.

If you’re someone who follows and cares about American independent cinema, you’ve noticed that what passes for independent film today is often markedly different from what we thought of as independent film 20 years ago. In films today, scenes have buttons. Second acts have set pieces. Characters are given “petting the dog” moments to make them more likeable. Films are crafted to appeal to quadrants. In other words, many of them are forced by the brutality of the marketplace to assimilate the same storytelling logic as a studio film. More so than just about anything I’ve seen in the last year, Frownland defies all of this. The film can be thrillingly hard to watch. A friend told me that it reminded him of the first time he saw Eraserhead – he didn’t know whether to laugh or cringe, and he found that at first confounding but ultimately exciting.

In short, the film is a trip. It crawls under your skin, and you’ll be thinking of its grubby little world and the characters who live within it for days afterward. Please go see it and support what has sadly become a lost vision of American independent cinema.

This amazingly accomplished first feature by Ronald Bronstein, made with a crew of four for seemingly little more than the cost of film stock, throbs with the energy and vision that independent filmmaking is all about. The story concerns the struggles of a nearly aphasic, socially challenged, yet smart, painfully self-aware, and desperately lonely young man to get through his days and nights. Keith (Dore Mann) is the odd man out in the crew of chirpy losers with whom he works selling coupon books door to door; he has a woman friend, Laura (Mary Wall, Bronstein’s wife), who is even more tormented and self-destructive than he is, and an irresponsible roommate whose own travails end in ruin. Bronstein specializes in moments of embarrassment and minor emotional bruises which blend pain with gentle, witty humor. With a sharp eye for telling details, he avoids satire and bathos and creates characters of a rare complexity, which his incisive yet passionate visual style (with its rare attention to light and its absence) realizes empathetically. If there’s any justice, Mann, whom Bronstein found working in a supermarket, will get an award for his transfixing performance; his clenched jaws, squinting eyes, and stifled speech avoid all stereotypes as he brings the character to life from within.