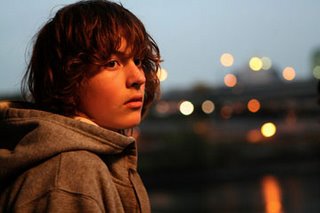 I don’t know Chris Doyle that well — I’ve met him a few times, have sent him a script, once, I think, and we’ve run articles on him twice in Filmmaker. (One, an interview with August Doyle, is here; the second, by Matt Ross, is here.) But I do have his email address, and whenever I’ve sent him a question he’s always responded surprisingly quickly — like two minutes later. So when I read this interview conducted over the ‘net with Doyle by Stu Van Airsdale, I immediately recognized the great d.p.’s distinctive cadence and penchant for metaphorical musing. Both, of course, are found in their visual correlatives in Gus Van Sant’s great new Paranoid Park, which I can’t recommend more highly.

Here’s an excerpt of the review over at The Reeler:

R: Gus is a Portland filmmaker; how did his sense of the city and its character influence this film and you, specifically, as a cinematographer?

CD: Portland drips through you after a while. As in Saskatchewan or the Australian desert, the climate has a great deal to do with how a film looks, the way the crew work, the energies of a place (or set). I feel that my Asian experience has taught me to GO WITH what you have, to assimilate it rather than to try to appropriate or overwhelm it. So the style of any of my films is a derivative of logistics [and] color — the way I assume the work will evolve as much as aesthetics or taste.