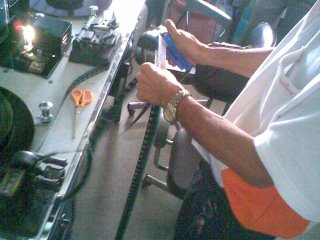 Producer Keith Griffiths forwarded the below article about the great Thai filmmaker Apichatpong Weerasethakul and censorship of his latest acclaimed feature, Syndromes and a Century, released in the U.S. by Strand Releasing. He also forwarded the accompanying photos, which are of the actual censorship in progress. Read on…

The film was one of six, commissioned under the artistic banner of New Crowned Hope, a festival of new and distinctive films from around the world, made under the Artistic Directorship of Peter Sellars and Executive Produced by myself, and my producing partner Simon Field. The whole project was acknowledged with a Special Citation at the L.A. Critics Awards this year for the production of “works marking major achievements in current world film”. Syndromes and a Century was also selected by many critics worldwide as one of their Top Ten choices of the year, and the film was one of the five short listed films for the BBC’s World Cinema Awards. 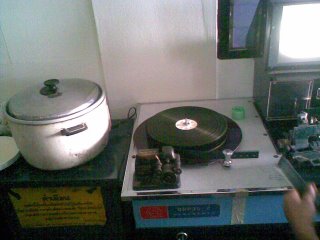 However, at his home in Thailand the situation has not been so comfortable for either the film or its Director and a threat of censorship has hung over the film for months before a release in the cinemas could be ratified. Four scenes in particular seem to have rattled the Thai guardians of public taste: a Buddhist monk strumming a guitar, two monks playing with a remote-controlled flying saucer in a park, a doctor kissing his girlfriend and a group of doctors sharing a bottle of whiskey in their hospital basement.

Apichatpong Weerasethakul has resisted cutting these scenes, and both he and his Producer have argued forcefully that far more violent and degrading films are approved every week for wide general release. Now their second appeal has been rejected after a ten-person committee screened the film in order to re-evaluate it. After the screening the filmmakers were permitted to defend their creative efforts, explain the background to the project as a whole and its inspiration. The committee comprised of representatives from the police, the Thai Film Federation, a Film Scholar, the Journalist’s association, a Consumer watch group, the Sankha (Buddhism) council, the Medical Council, and a “film expert”. Regretfully their “considered” reactions were not positive and summarised read like scenes from a play of the Theatre of the Absurd. 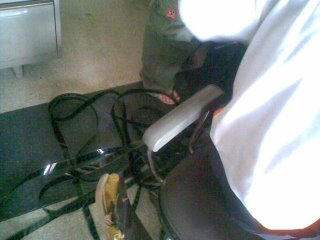 It was alleged that the film not only depicted Thai society in a bad light, but that it should not be shown to “outsiders” as it had no artistic merit. The filmmaker’s parents (the film was partly made as a tribute to them) should feel ashamed that their son exposed them in such a bad, distasteful and un-artful manner. However, a monk seen playing a guitar was acceptable, because foreign viewers might conclude that the monk was not from Thailand, but from Laos or Burma.

The previous censorship committee originally asked Apichatpong Weerasethakul to cut the four noted scenes from his film. But, after this fresh “appeal”, two more were added. Exhausted, depressed and humiliated by the whole experience, they finally agreed to accept the verdict and followed the print to an editing room, in the same building, where they were able to observe the objectionable scenes being removed. They documented this “cleansing” of the film with photos taken on their mobile phones. 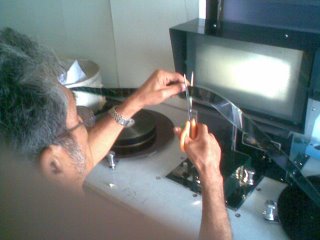 But there is always the possibility of a final twist to this tortured tale, as what they now plan to do is to replace the censored scenes with silent scratched black leader. In total this will now amount to about 15 minutes. This print will then be released in Thai theatres, as the “officially approved version”. Apichatpong Weerasethakul now also intends to present the committee’s comments at the start of the film. Twelve months after the films World Premier in the Official Selection of the Venice Film Festival, the Thai audience will be able to finally see this locally produced and acclaimed masterpiece of cinema, interspersed with intermittent silent black scratched leader. The longest scene of silence will run for seven minutes. It is proposed that this “new approved version” of Syndromes and a Century should be released in a cinema for a week’s run. The Director also intends to donate this special print to the Thai National Film Archive, which one can only presume is what preserving National Heritage is all about. — Keith Griffiths, March, 2008.

KEITH GRIFFITHS has amassed diverse and in-depth production experience within the independent film and artists film sectors. He has produced the films of the The Brothers Quay. He also produces the films of Jan Svankmajer, Patrick Keiller and Chris Petit and is developing an adaptation of the classic graphic novel SIGNAL TO NOISE by Dave McKean and Neil Gaiman.

In 1994 he was awarded The Observer Newspaper – Prudential Insurance /Arts Council of England Award for Film and this year has been awarded a Fellowship by NESTA (The National Endowment for Science Technology & Arts) to research and develop new publishing concepts for “radical independent cinema” in the DVD market.

He manages ILLUMINATIONS FILMS with Simon Field. Together they Executive Produced the award winning series of feature length films from developing countries for the Festival NEW CROWNED HOPE under the artistic direction of the acclaimed opera & theatre director Peter Sellars.

To learn more about Apichatpong Weerasethakul and his films, visit his website, Kick the Machine.