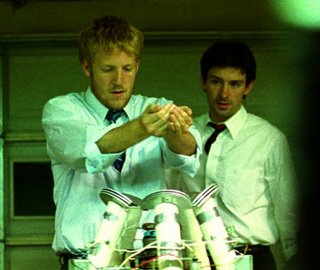 The genius of Primer is that form matches content: Carruth is telling a story about a couple of young inventors working out of a garage, so it follows that he’d take a similarly analog approach to filmmaking. An autodidact with an engineering background, Carruth shot the film in his native Dallas, with his parents’ house serving as a primary location. From the very first shot—which makes the windows of a darkened garage look like the view from an alien spaceship—the film has an eerie, fluorescent-tinged ambience that’s appropriate for science fiction and true to the life of a scientist. Add to that an underlay of computer-generated music (also composed by Carruth, who wanted the score to move from simple acoustic sounds to something more ethereal as the film progressed), and Primer feels as much like an ingenious homemade gizmo as the time machine its characters invent.

The film was also recently appreciated by Dan Coxon at The Flicker Project. From Coxon:

In fact the scientific complexities of the plot threaten to derail the film altogether, as they teeter on the brink of utter incomprehensibility, and occasionally fall over it. What saves it, though, is the time machine itself, a wonderfully imagined box of very limited tricks that shows just how complex, and downright frustrating, real time travel might be. Back To The Future it’s not.

The other saving grace is the stark purity of the camerawork, Shane Carruth staying within the confines of his budget by keeping shots simple yet perfectly composed, using natural and fluorescent lighting wherever possible in a way that gives the movie a distinctive sterile glow. It works remarkably well for the subject matter, and even adds to the sense of scientific experimentation. At its best it even achieves effects that other directors might spend hundreds of thousands of dollars on getting right.

Back in 2004 I interviewed Carruth, and we talked a lot about the ingenious no-budget production techniques he used to make his movie. An excerpt:

Filmmaker: So you wrote, you directed, you produced and you acted. How did you wind up as director of photography?

Carruth: I didn’t know anything about cinematography, and I didn’t know enough to know that I probably didn’t need to learn, that I just needed to find a d.p. I did a lot of reading and found out that cinematography was really just photography with a set shutter speed. I bought some tungsten slide film, because I knew that motion picture film was mainly tungsten, and then I just storyboarded the entire script [by shooting slides] with light that I had available to me. The slides helped so much — once I had an image that I liked, I was pretty much set as long as there wasn’t some kind of anomaly in shooting motion pictures. And then I bought some fluorescent banks from Wal-Mart for, like, $23. It took a long time, but I just set up each shot exactly the way that I wanted it and took slides of them, so by the time we were shooting we knew exactly what f-stop to use. We were going for as narrow a depth of field as possible — 2.8 mostly. Even for daylight stuff, we’d throw a ton of neutral density on there to get a really narrow depth of field.

Click on the link above for a lot more from the writer/director on the making of his film.

Of course, this post raises the question, what is Carruth up to now? I asked him that question in 2004, and here was his answer:

I have a script that I’m finishing now. I don’t honestly know the whole business side of it yet, but I’m hoping to make another film — hopefully on the strength of this one. We’ll see if it goes well.

Around the same time he told Amy Taubin in Film Comment he was writing “a coming-of-age romance between an oceanography prodigy and the daughter of a commodities trader. It’s set against trade routes in East Africa and Southern Asia.”

But there hasn’t been much news since. The Primer website has a lot of great stuff on it and a discussion board that Carruth shut in 2007 to new members due to, he said, the amount of time it took to weed out the spam and porn postings. A couple people posted asking about new projects, but there’s been no reply. Anyway, I thought I’d use this opportunity to kick some attention Carruth’s way and to publicly wonder what he’s up to. Primer was indeed one of the most original American indies of recent years, and I hope he’s on the track towards bringing us something new. To close, here’s an interview with Carruth found on YouTube: