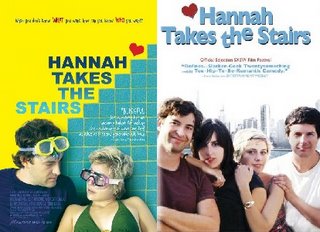 Aided by a greater competence when it comes to grabbing and resizing web images (a competence I’ve appropriated here), Peter Martin at Cinematical links to my piece on the DVD box art of Joe Swanberg’s Hannah Takes the Stairs and asks:

I agree that Hannah Takes the Stairs deserves a wider audience, but I’m not sure the DVD cover will make people want to pick it up and take a chance on renting or buying it. What do you think?

To be honest, I don’t know. As a producer, I’ve long been inured to the design indignity that occurs when a film moves from theatrical release to home video. I remember one particular poster, for Frank Whaley’s Joe the King. It was a bold, striking image of a house sitting on top of protagonist Joe Henry’s young head. When the folks at Trimark came up with it, they explicitly told us it wouldn’t be the video box, which wound up to be a more more conventional, Lifetime-movie-seeming shot of Joe on his bike with various family members ghosted around him. Even more recently, I helped a friend get her independent film distributed and spent some time talking with the arthouse distributor who told us that the original, edgier poster design simply wasn’t acceptable to Blockbuster.

The part of me that cares about having a DVD on my shelf for years and wanting it represent the film and its integrity sides with the various commenters to the Filmmaker and Cinematical posts, however. On our thread, the guys at Benten Films say, “Covers such as this was a motivating factor in my starting Benten Films. Is this Friends-like cover really going to sell that much more product?” Brandon Harris writes, “I saw that box coming out of Kim’s the other night after another unsuccessful attempt at finding a European DVD on Ferrara’s Mary and nearly collapsed. It makes the movie look like a remake of About Last Night or something…”

The most colorful comment, though, comes from Wiley Wiggins over at the Cinematical thread:

The one on the right looks like either a straight to video movie that was cast off from a Gay and Lesbian film festival or a Christian film festival. Or it could be an ad for herpes medicine.

The original blue/yellow one actually looked like someone with some design sense took a swing at it (other than the horrible wacky-font tagline on top).