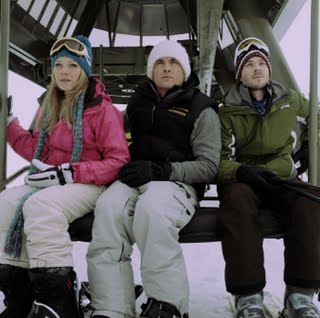 The most difficult choice I was faced with in making Frozen was the decision between shooting the film entirely practically or shooting it while incorporating such luxuries as a sound stage or green screen for certain scenes. Given the extremely challenging nature of the story and that it all takes place 50 feet in the air and in treacherous weather conditions, the pressure was on me to try and plan the shoot in as safely and as financially secure a way as possible. However I felt that my audience was way too smart and savvy to believe a survival film shot in the safety of a sound stage. I ultimately decided that if I gave the actors physical relief it would not be serving the story or their performances justice.

So there we were, on the side of a mountain, overnight, in the dead of winter, shooting through blizzards of up to 36 inches of snow a night, hanging from a chair-lift cable 50 feet in the air, and literally risking our lives at times. Throughout production, my crew even received calls from their associates on other film productions around the country asking if it was true what we were attempting to do and claiming that we must be crazy. People around the country were talking about us! I was even called “Ahab” during preproduction because of my unbending will to do everything in Frozen as real as possible, no matter how hard it would be. I was going to conquer that mountain and you were either with me or against me.

In the end we not only finished on time and on budget, but the Frozen experience is as undeniably “real” as it gets in every way. That crucial decision, however unpopular, literally made all of the difference. And while I still don’t know where or how I found the courage to attempt doing it, I would insist on doing it the same exact way if I had to do it again.

Just please don’t make me do it again. I’m still thawing out.