THE PERVERT’S GUIDE TO CINEMA 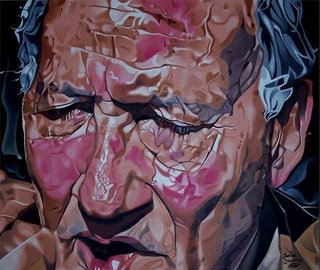 If you are a regular — like, hourly — reader of this blog, you know something about In Spring, the short Jamie Stuart piece which was posted on his own site and linked here only to be taken down shortly thereafter. Some (including, I’ll admit, me) wondered if Stuart had, in his continual skirmishing with the confines of publicity in the service of artmaking, crossed some kind of line with this piece, which incorporated a real interview with a misidentified Werner Herzog (who Stuart painted in 2005, shown here) in the THINKfilm office within a fictional mock documentary on the distribution company.

Now, Stuart at his Stream blog writes about the piece, about not only its technical realization but also its conceptual intent. For Stuart fans, it’s as close as we’re probably ever going to get to an aesthetic manifesto from the guy. You can check it out here.