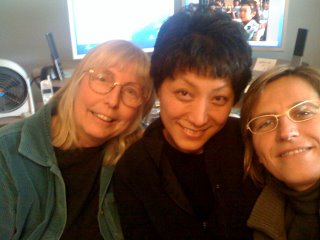 Filmmaker is hosting blogs from several of the participants of the various Sundance Labs this summer. Here’s part one of producer/director Deann Borshay Liem’s (Precious Objects of Desire) from the Sundance Documentary Edit and Storytelling Lab, which runs June 21 – 28.

Sometimes I refer to myself as “she.” This is because I’m a character in my own film and I have to separate who I am in real life with who I am on screen. Fortunately I’m a Gemini so this splitting into two (or more) doesn’t seem that odd. Any other editor might think this was nuts, but my editor, Vivien Hillgrove, has a bit of Gemini in her too, so between the two (or more) of us, we get by fine in the edit room.

Duality has always been a theme in my life. I was particularly fascinated as a kid with stories about babies who were switched at birth and grew up in the wrong families. It turns out I had been switched, too, not as a baby, but at the age of 8 with a girl I had never met. In the film, PRECIOUS OBJECTS OF DESIRE, I go to Korea in search of this “double” in an effort to resolve mysteries about her (and my) identity. The story of this search serves as the narrative spine for an exploration of the history and ethics of international adoptions from Korea, beginning with the Korean War.

I received funding for the film from the Sundance Institute and now have the privilege of attending the Sundance Edit/Story Lab coming up in a couple of days. To establish a kind of baseline, this is where we are. We have 80 minutes of an early assembly. It’s not a full assembly yet, but a series of scenes and character sketches strung together. Vivien and I will be screening this before our fellow filmmakers and advisors this weekend to get their (hopefully merciful) input. I wish we were further along, at the rough cut stage. But we’re not. I may sound calm about this, but deep inside I’m trembling.
I’m writing this blog in part at the Institute’s invitation, but also as an opportunity to share my experiences at the Lab. Since the Lab focuses on editing and story development, I thought I’d try to write about the working/creative relationship with my editor, as well as about our experiences at the Lab itself.

But who knows, my other self may change her mind once the Lab starts and end up writing about something else.

Photo caption: Before we were invited to the Sundance Lab, nice and relaxed. (L to R – Vivien Hillgrove, Deann Borshay Liem, Charlotte Lagarde)