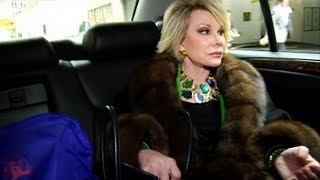 Well let’s just say this, making a film about Joan Rivers was not easy. Phew! There’s Darfur, Afghanistan and then there’s Joan Rivers! Our producer Seth Keal reminded me of truly the hardest decision we had to make during the filming process. It came during the editing process when we were faced with whether or not to leave in the vagina fart jokes. It almost came to fisticuffs in the editing room, seriously! You think Obama had it tough when he decided to send in 30,000 additional troops into Afghanistan? Well nothing is as divisive as the vagina fart platform. Do you sometimes waffle on your position? It was tough in that edit room. We were decidedly, unwaveringly strong in the face of vagina farts. And then, several tequila shots later, we found ourselves deep in battle, and some were ready to switch sides… That’s one small example of the tough decision-making, the daily pain and anguish we faced in making the Joan Rivers documentary. You want to know if we decided to leave in the vagina farts joke? How it all ends? See the movie!

Seriously, while our lives were never at risk making this film, we did face some challenges and hard decisions. One of the greatest challenges we faced when making a film about a pop-culture icon and a controversial legendary personality was confronting people’s preconceived idea of Joan Rivers. Joan Rivers’s persona has been widely exploited, so our task was to peel away layers to expose the self-driven, work-obsessed perfectionist. We devoted a lot of time to shooting Joan as she traveled throughout the U.S. and U.K. in order to capture her most unguarded moments and to find deeper meaning in what might otherwise be presented as a reality-television glimpse of a celebrity.

For a 75 year old, Joan rarely has downtime, and that can make it hard to isolate the deeper rhythm of the film we were working to create. Filming Joan over a year, we were constantly making decisions about which new ventures might be important to the final narrative and then figuring out how to physically shoot her marathon days. We were never certain which possible job offer might lead to a transformative event and define the film’s narrative arc. We adapted the thinking to be of new parents who missed their baby’s first steps: if we were not there to see it happen, it did not happen. When Joan was scheduled for 24 hours in a northern Wisconsin casino, we looked at it as a small gig in the dead of winter in a remote town that required three flights just to get there. At the last minute we decided to send Charles Miller (d.p.) to cover the trip with Joan; we figured it wasn’t a big show and probably not important, but you never know… and then, the raw and unexpected footage of an audience member heckling Joan turned out to be an integral moment in the final film.

The decisions on what to follow became the heartbeat that carries us along a year of reinvention in an unforgettable life. While much of Joan’s work this year could be taken at face value as entertainment, these unexpected scenes allowed us to construct a narrative that revealed Joan’s greater, more universal story — that of an aging performer, determined to succeed, in a business and culture driven by beauty and youth.