MORE FROM THE SUNDANCE DOC LAB 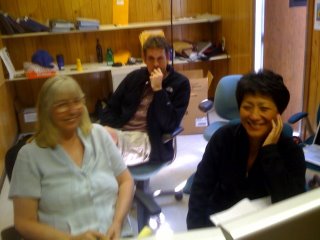 Here’s part two of Diann Borshay Liem’s report from the Sundance Documentary Edit Lab. (For those who missed Part One, you can read it here.)

It’s Day 5 at the Sundance Doc Edit/Story Lab. For me, the lab started where our film ends. During our first work day, editor/advisor Mary Lampson shared a personal story about duality and living a false life. We laughed, I cried. Scott (our assistant editor) cued up “Getting to Know You” and Vivien and I danced around our edit trailer. Amazingly, through this odd process we uncovered what I think will be the ending to our film.

Before arriving I had expected long serene hours of editing amidst beautiful trees. Not so! Each day brings a stream of various advisors into our edit trailer. The first day it felt like a gentle onslaught, as with each advisor, I bared my soul anew. But now we’ve gained a rhythm – we edit then grab an advisor to watch and give comments. And what comments they are! Without exception, each advisor has offered a new way of looking at a story thread or character, a different way of connecting disparate themes, fresh ways of looking at structure.

Then there are advisor presentations. Mary Lampson screened early work from Emile de Antonio and screened a segment from UNDERGROUND. Laura Poitras screened parts of MY COUNTRY, MY COUNTRY as well as a work-in-progress of her current film. Kate Amend showed segments from INTO THE ARMS OF STRANGERS as well as BEAH, A BLACK WOMAN SPEAKS. Sam Green screened a segment from THE WEATHER UNDERGROUND and a series of his short films. Woody Richman showed TROUBLE THE WATER. Lewis Erskine screened a segment of JONESTOWN. The screenings are fantastic but most fun and instructive are their personal stories (how they got into the field, what motivates their work) as well as the close analysis of their films.

There are trees here at Sundance, and a river running through them. In Cara Mertes’ infinite wisdom, she planned and timed a hike up into the mountains just when we all needed fresh air. (Vivien and I refer to Cara as the “psychic camp director” because she knows what we need even before we know it ourselves). As we hiked single-file up the mountain, Woody Richman walked behind me sharing stories of his childhood, his experiences around race and adoption, as well as stories from the edit room of FAHRENHEIT 911 and BOWLING FOR COLUMBINE. We stopped to take in views and admire wildflowers. When we reached the top, the Institute staff pulled out bottles of wine from their backpacks. The view was gorgeous, the wine frosting on the cake.

Back in our edit trailer, I ask Vivien what it’s like to have me in the edit room while she’s editing me on screen. I’m becoming a little self-conscious because there are two of me in the room at any given time. She responds, “You’re beyond schizophrenic.” I take this as a compliment. “But I have Venus in Gemini so we speak the same language.” Which is to say she’s a multiple, too, and I can put aside my self-consciousness.

Tomorrow we’ll be screening our edited scenes and rough cuts for The Group. The fear I arrived with has given way to calmness and determination. What we show tomorrow will not be perfect. But it no longer matters. We’ve leaped light years ahead on our film. On Saturday, I’ll be leaving Sundance with a greater sense of purpose, a feeling of being embraced by the filmmaking community, and a film that I thought would be good but now I think will be damn good.