I was on my way back to the U.S. after spending a week in Belgium for the 2011 Ghent International Film Festival, where my first feature film Girlfriend had screened in the World Cinema section. My week in Ghent was spent seeing many of the great festival films of the year, eating Belgian chocolate, waffles, and enjoying all the different beer varieties the country proudly offers. In the Mariott elevator I met my favorite foreign filmmaker of the moment – Andrei Zvyagintsev, whose new film Elena ended up winning the festival. I knew Ghent was likely going to be our final festival for Girlfriend, concluding a 14-month run of screenings that began last fall at the 2010 Toronto International Film Festival. 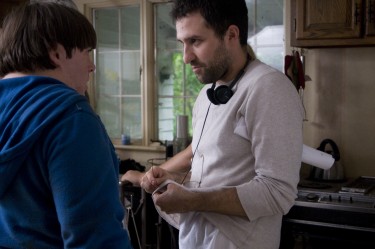 Justin Lerner on the set of "Girlfriend"

On my way to the Brussels airport, I got two pieces of news: The first, that Girlfriend had, in a tie with the film Pariah, won the audience award for Best U.S. Feature at the 2011 Mill Valley Film Festival. With genuine surprise, I passed the news along to my team, happy to end our run on such a high note.

A second email came soon after from IFP, informing us that due to our win in Mill Valley we were eligible for the Gotham Independent Film Audience Award. I took a look at the other films short listed – Pariah, Attack the Block, Being Elmo – “big” indie films, many backed by studios and with a lot more resources than we had to get out the vote. While it was an honor to be in this company, we knew that the odds were not in our favor.

I got back to my apartment, unpacked my bags, and opened the Gotham Awards voting website. I clicked on my film (yes, I voted for myself), and I voted for four others which I’d seen and liked this year at festivals. I passed the link on to some family, friends, and supporters who had seen my film, and asked them to vote too.

To be honest, it was astounding to me that we’d even come this far – for about $250,000, we shot a film in 19 days, using mostly non-professional actors, starring my childhood friend Evan Sneider, a 31-year-old aspiring actor with Down Syndrome. We premiered in Toronto. We won four other U.S. festivals, screened in seven countries. Evan was getting national attention from critics for his performance. If this “short listing” at the Gothams was where it ended, it all was a great success.

A few days later while driving to pick up my dry cleaning, my producer called me to let me know Girlfriend made it to the top five and would be going to the Gotham Awards as a nominee. I went home to look at nominees in other categories and…. wow… Tree of Life, Martha Marcy May Marlene, Beginners, Take Shelter… all films I loved this year.

I’m humbled and honored to have my first feature film be mentioned in this company. In the spirit of a good competition and so many other deserving films, I voted in the final round for Buck, which my film is nominated against.

Looking forward to the awards ceremony. I’m bringing my friend (and lead actor) Evan Sneider as my +1.