THE MOTHER AND CHILD REUNION: “WE NEED TO TALK ABOUT KEVIN”

by Howard Feinstein
in Filmmaking
on Dec 9, 2011

The title is ironic: The conversation never happens. (Kevin’s mom suggests it in a voiced-over letter to her husband, but, if it is even sent, it is — seemingly — ignored.) Eva (the chameleon-like Tilda Swinton, brilliant as ever) and Franklin (John C. Reilly) are the parents of a troubled boy who tortures his mother with line-crossing defiance. (He is played by three kids of different ages. The principal action revolves around the oldest, perfectly portrayed by Afterschool’s Ezra Miller as an intimidating glop of arrogant negativity.)

Eva never wanted the unplanned child. She yells much more loudly than necessary during childbirth and appears desolate in her hospital bed. While taking him for a walk in his stroller, she drowns out his endless screams with the comforting sound of a jackhammer. Her new domestic lifestyle she has reluctantly embraced in New York is a far cry from the exciting, rarely monotonous job she has relinquished as a successful travel writer gallivanting around the globe.

We occasionally see her revel in her more spontaneous, more uninhibited past in this non-linear kaleidoscope of a movie, most notably at a tomato-tossing festival in Valencia where she yields to the passion of the moment, with a screenful of celebrants crammed into an ancient street holding her aloft almost Christ-like above pools of the juice. (I’m not sure if this was a conscious script idea derived from Christian iconography, but all three Ezras use their bodies as currency to toy with their mother: unrelenting shrieks, incontinence, and clips of fingernails held menacingly in the mouth, among them.)

Boredom and repetition were, she thought, out of the question in her life. In Lionel Shriver’s novel, Eva’s line of communication is epistolary, a series of letters that augments the non-fictional dimension. That structure would have been nearly impossible to translate to film. At one of those awkward moments when it’s just easier to agree, sweet but spineless Franklin proposes marriage and she gives in.

What rips Eva apart, as well as the family unit she creates, is the nearly complete lack of interest she takes in her son. You can’t be sure if the response is the result of extended post-partum depression or an egotistical unwillingness to grow beyond self-absorption. The child’s pain morphs into a cruel, non-stop manipulation of Mom and ultimately a vendetta to decimate her. Kevin realizes that the best way to snuff out any joie d’esprit that remains is to separate her from her loved ones and undermine her place in the community. 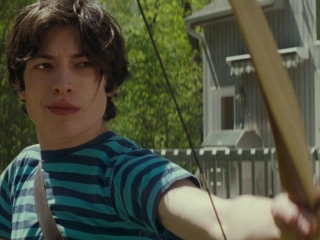 Ezra Miller in "We Need To Talk About Kevin"

Franklin is oblivious to the overt nastiness Kevin directs at his mother. Archery, which Dad thrusts upon the boy, becomes a big help. At 16, Kevin commits a massacre at his high school with bow and arrows, with bike locks he has placed on the exit doors maximizing the damage. Lea had in fact planted the kernels of the archery obsession, reading Robin Hood to him several years before. That was the only time he showed her any affection.

Director Lynne Ramsay has a lyrical, painterly touch that defies conventions of space and time. A true artist, she began her film career as a cinematographer, and is able to fuse a personal vision with the capabilities of the apparatus. Ratcatcher and Morvern Caller, which she shot in her native Scotland, reveal this talent. This is a difficult task as it is when films are shot quickly (Kevin was made in only 30 days), even when their continuity is conventional. But in Kevin, we have flashbacks and flash-forwards, jumps in temporality that are not necessarily explained (though the fragments make perfect sense when viewed as a whole). Years can pass, or advance, with merely a cut, if that, distinguishing them from another event, memory, or perception. The images are at times abstract, in other instances naturalistic, but often falling somewhere in between. This is intuitive, impressionistic filmmaking, frequently handheld, an assemblage as tough to pull off as solving an algebraic theorem. The film is truly organic.

Yet Ramsay only occasionally allows the sensuous beauty of the time shifts and attendant color schemes and movement that lend them coherence to overpower the central narrative. (She co-wrote the screenplay with Rory Stewart.) The title may include the son’s name, and the darkest sections of the film may feature his sickening behavior — the director does not show the massacre itself — but the focus is always on Eva. 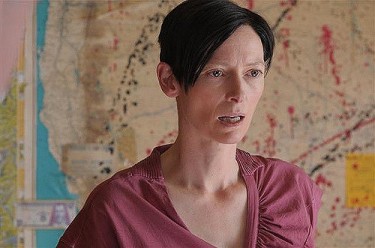 Tilda Swinton in "We Need To Talk About Kevin"

Ramsay dissects Eva’s reactions, her thwarted efforts to reach her son, and her emotional deterioration. She captures her frustration in attempting to bond with her child, burrowing right into her mind, refusing to allow her occasional unreliable narration of the past to obstruct the storyline. Even the sibling rivalry inherent in a subplot about Ezra’s resentment over the birth of a younger daughter, the cursed Celia (Ashley Gerasimovich), plays a distant second fiddle to the mother-and-son relationship. As for Franklin, a non-entity really, we know almost nothing of him and his work; neither do we discover the source of their income, sizable enough to buy a huge house outside the city.

The film is violent in a personal way: Even if we don’t witness the murders of students, we do see smaller scale injury and death — you could say more intimate violations, of family members — all connected to Eva’s paucity of maternal instinct. Ramsay tempers the dark mood with a soundtrack that includes loads of country music and pop rock from the ‘60s. But she unnecessarily places tracks over scenes that literalize lyrics (The Beach Boys’ In My Room, when she is combing through the oldest Ezra’s possessions; Buddy Holly’s Everyday (“love like yours will surely come my way”) during a scene when she fails to get middle Ezra to throw a ball back to her). My only other problem with the film is the overuse of the color red — tomatoes and blood, okay? Not the most subtle visual link to maintain momentum. The most irritating example is when the oldest Kevin, in a bright red shirt, makes an open-faced strawberry jam sandwich and slams it, face down, on the glass breakfast table, although the shot of Eva standing before shelves stocked with red soup cans runs a close second.

In spite of her son’s unspeakable actions and their history of disconnect, Eva does, at the film’s end, experience a sudden, heartfelt surge of love for him. The empathy unique to motherhood surfaces at last. This is the only moment when Kevin looks like an innocent, shockingly angelic, actually questioning his misdeeds. If the power of love had been manifest from the get-go, the boy might have developed differently and not deflected his resentment and pain toward her and many, many others. We Need To Talk About Kevin doesn’t resolve the nature-versus-nurture debate, but sure places its bets on the surroundings.