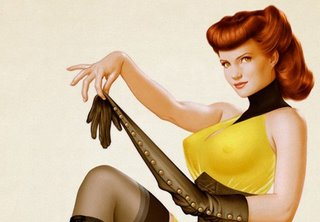 While we here at Filmmaker were busy trying to be so ahead-of-the-curve with our 25 New Faces list, we were dreadfully behind-the-curve in another area: figuring out an appropriately smart and knowing take on Comic-Con that would enable us to preserve our indie cred while attracting a fair share of fanboy surfers. Next year we’ll figure it out, but as for this year, I’m glad we didn’t try because we wouldn’t have beaten Karina Longworth’s take on the event, which benefits from her own experience at a Comic-Con of days past.

When I first went to Comic-Con, almost a decade ago, it was purely as a girlfriend. My then-love interest and I had gone to our respective home towns for the summer, and one day he called and asked for my measurements––he was making me an Uhura dress.

Longworth goes on to look at the expanded female presence at this year’s Comic-Con, which is initially exciting but soon reveals itself to be kind of depressing. Surveying the upcoming crop of action flicks and their female screen heroes, she writes, “What we’re seeing is the ghettoization of the female action star to below-the-title, near-disposable status. Even as eye candy, the sex appeal that many of these girls bring to a given film are just one element of an overall production design designed to keep aural erections intact for the duration.” The rest of her piece is recommended at the link above.