by Jason Guerrasio
in Filmmaking
on Aug 7, 2008 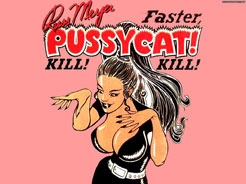 First you announce that you’re done teasing us and have begun the remake of The Inglorious Bastards, now you dangle a Faster, Pussy Cat! Kill! Kill! update… with Britney Spears attached!!!

Well, that’s the rumor on Ann Thompson’s blog and the blogsphere has been salivating about it since.

Whether this is a calculated PR move by the Britney camp to actually get a project off the ground or just another one of QT’s chances to go nuts and remake every Grindhouse title that’s on his shelf, if I can be serious of a second, I do think this would really test the fabric of Tarantino’s pull with audiences. Though the hype of Kill Bill and Grindhouse were huge, box office was low for both. Were they too niche? Does having Brad Pitt attached to Bastards lock the film as a money-maker and give Tarantino the capital to make the B-movie of all B-movies?

I know, I’m thinking way too deep into this (what can I say, it’s a slow news day), but I am curious to see if there would be a Tarantino backlash (or has it already begun?).

But, Quentin, if you do it. Go all out. Cast Lindsey Lohan and Paris Hilton as the other strippers. Russ Meyer would have wanted it that way…