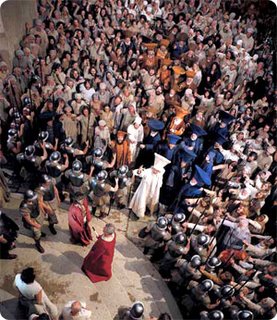 The Long Now Foundation was established twelve years ago to “creatively foster long-term thinking and responsibility in the framework of the next 10,000 years.” One of its founding board members is Brian Eno, and he submitted a fascinating post to the site’s blog recounting the experience he had watching a theater piece in Oberammergau, in Upper Bavaria.

In the early seventeenth century, as plague raced across Europe, the people of this small town made a deal with God: spare us and we’ll perform a Passion play every ten years. All of us. The whole town.

True to their word, they’ve done this every decade since. The first performance was in 1634, and ever since it’s been at the turn of the decade. It’s a startling event, because everyone in the town really is involved. All the actors, the musicians, the technical staff, the director, the costumiers, the carpenters, the singers, the stagehands, the press agents, the bartenders, the ushers – are local people. In normal life they’re the hairdresser, the postman, the dentist, the notary, the teacher, the plumber, the bus driver.

The next Passion Play won’t occur until 2010. Eno instead attended a staging of Stefan Zweig’s Jeremias, which featured a cast of only 500.

I won’t attempt a description of the content: my German is so rudimentary that I understood very little of what was going on. It was 3 hours long, but it didn’t matter: I was intrigued.There were at times several hundred people on the huge open-air stage (the audience sit inside, under cover, but the stage area is open to the sky, the elements and the changing light of evening): there was fire, rain, camels, sheep and horses, a 50 piece orchestra of local players and a 100 person choir of local singers…. all to a totally professional standard. There was nothing ‘local’ about the quality of any of the performances.

What would it do to a community to have a tradition as long and as defining as that, to know from an early age that you were, probably throughout your life, going to be woven into this incredibly rich tapestry of time, spirituality, art and craft? What would it be like to be a child growing up there, to watch your parents and grandparents learning their lines and practising their parts and building the sets and making the clothes? It must be so rich, such a powerful social binder and foundation.

Oh – I suddenly realised. It would be like tribal life. For isn’t this exactly what growing up in Bali or Mali, with their long traditions of folk art, must be like?

Back in the world of immediacy, Eno has a new record with David Byrne. It comes out next week and the first single can be downloaded for free.