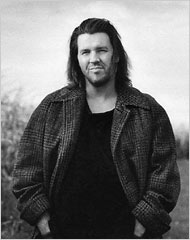 I was absolutely stunned to return home to New York tonight from a wedding in Massachusetts and read online that one of my favorite writers, David Foster Wallace, died this weekend in Claremont, California.

Wallace’s novels include Infinite Jest and The Broom of the System, and he is the author of several excellent books of essays, including A Supposedly Fun Thing I’ll Never Do Again and Consider the Lobster.

From the obituary in the L.A. Times:

“What was a party is now a wake,” Ulin said as the news of Wallace’s death circulated. “People were speechless and just blown away.

“He was one of the most influential and innovative writers of the last 20 years,” Ulin said.

“He is one of the main writers who brought ambition, a sense of play, a joy in storytelling and an exuberant experimentalism of form back to the novel in the late ’80s and early 1990s,” Ulin said. “And he really restored the notion of the novel as a kind of canvas on which a writer can do anything.”

At the Huffington Post John Seery posts a personal rememberance. Below is Wallace on Charlie Rose. (He starts 23 minutes in.)

From Timothy Williams’s obituary in the New York Times:

Mr. Wallace burst onto the literary scene in the 1990s with a style variously described as “pyrotechnic” and incomprehensible, and it was compared to those of writers including Jorge Luis Borges, Thomas Pynchon and Don DeLillo.

His opus, Infinite Jest, published by Little, Brown & Company in 1996, is set in the near future, in a time called the Year of the Depend Adult Undergarment and is, roughly, about addiction and how the need for pleasure and entertainment can interfere with human connection.

In a New York Times review of the book, Jay McInerney wrote that the novel’s “skeleton of satire is fleshed out with several domestically scaled narratives and masses of hyperrealistic quotidian detail.”

“The overall effect.” Mr. McInerney continued, “is something like a sleek Vonnegut chassis wrapped in layers of post-millennial Zola.”