by Nicholas Rombes
in Columns, Filmmaking
on Dec 19, 2011

The implied violence before the explicit violence, as the patterns and objects of Dorothy’s apartment have settled into a merciless, strict formalism. The fact of Dorothy’s bare leg, the tenderness of her foot upon the carpeting, sets a machine in motion somewhere. In his monumental, multi-volume work Rising Up and Rising Down, William T. Vollmann explains his reasons for exploring violence in such calculus-like detail: “I wanted to find a base point beneath which we couldn’t go—the ‘floor’ of evil. I could then note that the fall would not be bottomless. I might hit it and die from the distance but at least I wouldn’t fall forever” (Vol. 1, p. 292).

Like a painted-over painting, something lurks behind the image of Frank and Dorothy. It is, perhaps, an act of time-reversed violence, like finding—beneath a baroque pastoral oil painting with soft clouds and gentle hills—this electrifying portrayal of savagery: 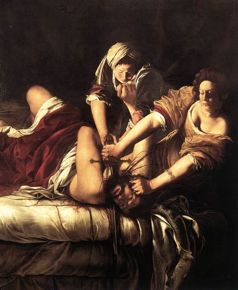 Judith Slaying Holofernes (1614-20) by one of the only female painters of that era, Artemisia Gentileschi, whose brush strokes capture a terrible thought come true, in the same sort of doomed light as the frame from Blue Velvet. Perhaps Dorothy’s secret thoughts—based on what Frank is about to do to her and what he has been doing to her, ritualistically—tend toward the frozen-in-time beheading in the Gentileschi painting. For now, though, all Dorothy can do is look away. She is, in fact, commanded by Frank not to look. A thousand gazes are upon her: Frank’s, Lynch’s, the camera’s, ours. Everything, here, is still falling, down and down. The floor of evil is not yet in sight.