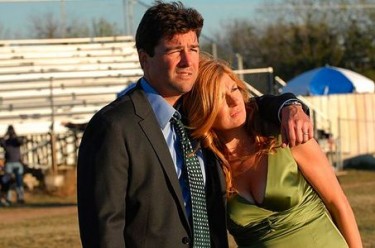 And we’re back with my fourth and final post in a series looking at some of the year’s best TV. In previous weeks I’ve sung the praises of FX’s Louie, HBO’s Game of Thrones, and AMC’s Breaking Bad. This week I’ll be gushing about NBC and DIRECTV’s dearly departed football drama Friday Night Lights.

One Wednesday night this past February I sat on the floor for an hour at a loud sports bar just east of Union Square in Manhattan. Three-hundred-and-sixty-four days out of the year, this place would not have not been my scene. But tonight, they were screening “Always”, the Friday Night Lights series finale. Live, on a big screen, with free beer. Now before I get into just how good a TV show has to be to inspire a bar like this to give out free beer, here’s what happened next: only moments into the episode, the sound cut out.

Some wires must have gotten crossed. One minute we were listening to the show’s trademark Explosions in the Sky soundtrack and pseudo-improvised dialogue between actors Kyle Chandler and Connie Britton, and the next, a feed from the bar’s jukebox was blasting “Pour Some Sugar on Me” in its place.

There was an audible gasp. The audience kind of glanced at one another, a few people giggled, others tapped their feet impatiently. When two minutes had passed and the sound hadn’t been restored, you could feel the tension in the air. This wasn’t Monday Night Football. This wasn’t something everyone had come to watch in the background while they drank Bud Lights and ate wings. This was appointment viewing; every line was essential.

If you’re reading this, you likely fit into one of two camps. Either you’ve watched Friday Night Lights and you’ve already fallen in love with it, or you know someone else who has. Maybe you’ve seen a gushing post on Facebook by a friend whose taste you usually respect, and thought, “Isn’t that that football drama with the dude from the Battleship trailer? Weird.”

Yes, it is weird. But believe the hype – Friday Night Lights is great. But more than that, it’s the rare TV show that has quite literally risen above its station.

Let’s go over the talking points:

1. Created by Peter Berg and Jason Katims, Friday Night Lights (or FNL) does not look or feel like anything else on TV. Handheld cameras, actors encouraged to improvise, Explosions in the Sky in the background. It all adds up to a style that feels both oddly realistic and unabashedly nostalgic.

2. By no means do you have to be a football fan to enjoy the show. I watched all five seasons and still have no idea what exactly a running back does.

3. After a truncated second season on NBC that reeked of network notes, Friday Night Lights was considered all but cancelled before being saved by DIRECTV’s Channel 101. On its smaller new network, the show was able to reclaim its artistic integrity, and grow over three more seasons.

4. FNL doesn’t have any qualms about exploring topics that network TV usually shies away from. There’s a continued focus on the stark realities of living in an impoverished West Texas town. Racial tensions are always brewing under the surface. In season four, one character gets pregnant, considers having an abortion, and GASP, actually goes through with it.

5. At this year’s Emmy Awards, Kyle Chandler (one half of the most realistic marriage on TV) unexpectedly won Best Actor, a surprising post-mortem honor, especially considering the fact that the show never received the critical attention it deserved while airing.

But while that Emmy win was certainly sweet, and as encouraging as it is to see FNL enjoying a healthy and happy life after death thanks to Netflix Instant Watch, this was never a show about victory. It was one about endurance. Over five years, the cast and crew consistently challenged themselves, reinventing key elements year after year to keep things fresh. The fifth and final season, perhaps the show’s strongest overall, was no exception. A plotline focusing on quarterback Vince Howard’s (The Wire’s Michael B. Jordan) strained relationship with his recently paroled father (Cress Williams) made for some seriously gripping television; and an unexpected twist introduced in the series’ penultimate episode not only cut to the core of the show’s themes, but could have provided enough material for several more seasons had the show continued.

As strong as the final season was, FNL’s boldest move, and perhaps greatest achievement, came two years earlier. At the end of season three, the show was facing a predicament that many shows had faced before it. The majority of the cast were now playing seniors, set to graduate at season’s end. So what’s a high school football drama to do? Follow these characters on to college? Have them all end up playing football at the same Texas University, no matter how improbable that might be? Or write off several of the show’s most beloved characters, introduce a whole new cast to take their place (the “next generation” if you will), and risk alienating the majority of the fan-base?

Not only did the writers end up going with the gutsier latter option, they changed up the show’s setting and premise right alongside the departing cast. Somehow it worked. The fourth season found Coach Eric Taylor booted from the Dillon Panthers, the team we spent three seasons watching him build, and put in charge of the East Dillon Lions, an ailing group of rejects in an economically devastated school district. Not only did this shift inject some much needed conflict into the proceedings, it allowed FNL to explore its socially-conscious mission statement on a whole new playing field. To top things off, the new characters proved to be just as engaging, and ultimately just as well-loved as the original cast. Many shows struggle through their twilight years. Friday Night Lights managed to feel even fresh and exciting with each subsequent season.

A few weeks ago I realized that if Friday Night Lights hadn’t closed up shop after season five, new episodes would be starting up again around this time of year. The more I thought about this, the sadder I got. The absence of this TV show literally made me lonely. How does that happen? How do fictional characters escape the “Not Real, Do Not Miss” section of my brain, and find their way into that part usually reserved for living, breathing, non-fictionalized loved ones? Over five years, this show about a sport that I couldn’t care less about; a show that should have been a cheap nighttime soap; somehow became family. I can count the pieces of art that have surprised me like that on one hand.