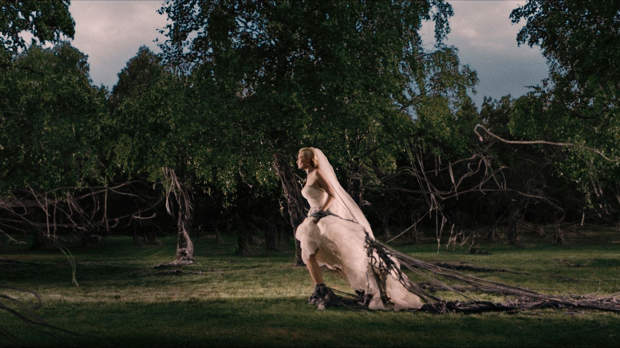 As 2011 comes to a close it’s time to look back on the year in movies. It’s always tough for me to come up with a yearly best movie list because I never feel I’ve seen everything by Jan. 1. By this time of year I’m still trying to finish watching the award contenders (still on my list: Hugo, War Horse, Moneyball, Tinker Tailor Solider Spy, The Help).

So here are 10 movie moments from 2011 (in no particular order) that have stayed with me.

“I Want You To Help Me Find A Killer of Women”
I know you’re probably tired of hearing this line as it’s in all the TV spots and trailers for David Fincher’s The Girl With The Dragon Tattoo, but after seeing the movie there was no better moment for me than when Mikael seeks out Lisbeth for her help. The look Rooney Mara gives after hearing this line gave me goosebumps. Seeing close to an hour how this woman goes through horror after horror, she is almost broken out of a spell when she hears these words. It’s a testament to the story structure and performances that even through I knew the line was coming I still felt such a jolt.

Hands Diry
If you went into Nicolas Winding Refn’s Drive expecting a Fast and Furious-like hot rod thriller you were disappointed. But what you did get were moments of unexpected gore. The hotel scene I’d put up there as one of the most graphic I’ve seen in a while. And what makes it work is to that point Refn has lulled you with sparse dialogue and an amazing soundtrack. Then, suddenly, Christina Hendricks no longer has a head!

It’s The End of The World As We Know It
Melancholia‘s opening sequence has been analyzed since its premiere at Cannes, and for good reason. A foreshadowing of the horror to come, Lars von Trier brings beauty to the end the world with astounding cinematography, digital effects and, of course, Richard Wagner’s Tristan and Isolde.

Uggie
Yes, Arthur in Beginners is cute (and would be great conversation if you could read his mind) but Uggie in The Artist had more memorable moments. When George Valentin’s at his darkest, his faithful sidekick is there to bring a little lightheartedness. My favorite, when he has to find help after Valentin sets his apartment on fire.

“She was only 16 years old”
It’s a line from Get Carter, and a running gag throughout Michael Winterbottom’s delightful The Trip. Steve Coogan and Rob Brydon go on a road trip to review the English country’s finest restaurants, and always trying to one up each other they attempt to deliver the best Michael Caine impersonation. (Thought I think the Caine line in Get Carter is “15 years old”; but who’s counting?)

Albino Alligators
It’s one of the most bizarre sequences I saw in a theater this year. Not surprisingly it comes from Werner Herzog. After exploring the amazing drawings on the walls of a cave in southern France, Herzog switches gears for Cave of Forgotten Dreams‘ finale and leaves us with huge albino alligators. It’s quite especially, even in 3D.

Dali!
There are some things I like (and dislike) about Midnight in Paris, but the moment I loved was Adrien Brody’s brief cameo as Salvador Dali. His look, voice, the mustache, he had it all down. Now if there’s only a way to get Brody to put that flare into one of his films…

Heeeeer’s Flamo
It’s one of the most shocking and entertaining introductions to a documentary character I’ve seen in some time. While exploring the rough streets of Chicago’s inner city to show how a group known as CeaseFire try to stop violence from occurring in their neighborhoods, The Interrupters director Steve James leads us to the doorstep of Flamo. You hear his life story in under three minutes, and realize the challenges CeaseFire goes through to put an end to violent crimes.

The Big Reveal
One of my favorite acting moments was between Michael Shannon and Jessica Chastain in the storm shelter in Take Shelter. The horn has blown, they’ve gone in the shelter, the storm seems to have passed. Now it’s time to see the damage outside. The tension and fear delivered by Shannon and the strength and assurance by Chastain as they slowly walk up the steps to the shelter door is incredible.

“Marcy’s Song”
As I’ve already written this year, one of my favorite moments from Martha Marcy May Marlene is John Hawkes’ rendition of Jackson C. Frank’s raw “Marcy’s Song.” Hawkes, who plays in a band during his free time, gives a beautifully somber performance that not only puts Martha in a trance but also the audience.