by Nicholas Rombes
in Columns, Filmmaking
on Jan 6, 2012

These are simple, almost childlike questions and answers, tender, quiet exchanges of whispered words as if to replace the previous horrors with a new hope. In John Banville’s 1997 novel The Untouchable, Victor Maskell narrates the story of his transformation into and life as a double agent for the Soviet Union during the 1930s, 40s, and 50s in England:

We were latter-day Gnostics, keepers of a secret knowledge, for whom the world of appearances was only a gross manifestation of an infinitely subtler, more real reality known only to the chosen few. . . . This gnosis was, on the material level, the equivalent of the Freudian conception of the unconscious, that unacknowledged and irresistible legislator, the spy in the heart. Thus, for us, everything was itself and at the same time something else.

In Blue Velvet, it’s not any of the characters in particular who appear to be one thing while secretly being another, but rather the entire film itself. Blue Velvet is a double agent, a postmodern film disguised as an artifact from the era of classic Hollywood or, more radically, a movie from the classic Hollywood era disguised as a postmodern film. There are only a handful of such double-agent films (whose titles are unprintable; that would be a betrayal), films so ideologically and aesthetically incoherent it’s as if the answer print and the internegative are in pitched battle on the screen. In some untraceable way, the frame at second #2961 is in covert communication with David Godlis’s photograph of Blondie on stage at CBGB in 1977: 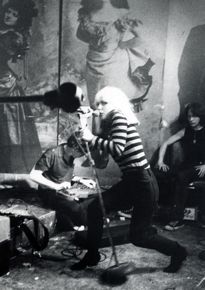 Debbie and Dorothy, separated by nine years that seemed an eternity, facing screen left and screen right, holding and being held, whispering a code into a microphone and into an ear. A photographer named David, and a director named David. A black and white photograph capturing a moment of cultural espionage, and a color movie still acting as an informant. Both images exist, as Victor Maskell says, as themselves “and at the same time something else.”