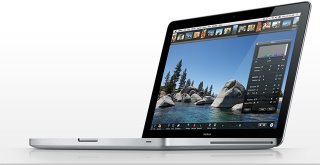 Despite a blog post below in which we criticized Apple for some subtly unrealistic threats having to do with a government decision on artist royalties, we are Apple fans. Really. Our magazine is made on Macs, I’m typing on one right now, and Jamie Stuart’s work, which we feature on our home page, is edited with Final Cut on a MacBook Pro. So, like the techies, we look forward to Apple product announcements and the unveiling of what we will be upgrading to soon.

The aluminum enclosure of Apple’s new MacBooks and MacBook Pro’s, which were announced this week, looks sleek and cool, and the new graphic cards seem great. The new mini Display Port could be a very useful addition. But there’s one thing about the announcement that leapt out at me: the elimination of FireWire from the MacBook entirely, and the elimination of FireWire 400 from the MacBook Pro. I’m a MacBook user, and I use FireWire to back up my computer on portable hard drives. I asked Jamie what he thought about this product change and here’s what he wrote, commenting about both the laptops’ FireWire change and the new port configuration.

Why entirely get rid of the FireWire 400? That’s the format that virtually all Prosumer cameras use. Are filmmakers going to have to buy new connector cables because of this? Furthermore, having only one FireWire in and of itself is inconvenient. My current laptop only has one, but subsequent versions have had a 400 and an 800 (this means that I have to transfer my footage to my computer first, then transfer it again to an external drive, instead of just going straight into the other drive.) Also, by putting all the ports on the left side, they’ve made it inconvenient for mouse-users such as myself. Currently, I plug into the right-side USB, and it’s fine. Now, I’ll have to plug in on the left and wrap the cord around the back of the computer to the right side.

They’ll have to redo this for then next revision. This is really bad. Or wait until the 17″ comes out since that usually has more ports.

There’s a lot of talk about these changes online today. In an article by Mark Webster in The Independent, he sees Apple’s strategy as all about eliding differences between the consumer-y MacBook line and the professional MacBook Pro line.

But can you do without a FireWire 400 port – the connection most video cameras still support? (Apple will make adapters available, for a price, apparently.) Apple seems to be saying ‘it’s USB for consumers and FireWire for professionals’ as the new MacBook Pro still has Firewire 400 and 800 ports. A growing number of consumer hard drives and DV cameras do use USB instead of FireWire, tis true. Soon enough for you, though?

Despite the omission of FireWire, once again Apple has narrowed the gap between its consumer and pro machines. Why?

Partly as a response to current MacBook owners. Jobs noted that the three things MacBook owners wanted to see most in future models were: metal case, faster graphics performance and an LED-backlit display. That display is glossy, by the way, as it is in the new MacBook Pros, raising the ire of some photographers who really prefer matte.

Note that the MacBook video card, as Macworld points out, doesn’t have its own RAM like ‘proper’ video cards. It still borrows some of the MacBook’s main memory, although a lot more than before – 256MB. So adding more RAM will always improve your MacBook, giving the system more overhead above that video-allocated 256MB.

But still, why did Apple make a consumer machine that looks and acts like a pro machine? Don Frakes of Macworld thinks the new-and-improved MacBooks will shift what he calls “the indecision point” between the MacBook and MacBook Pro. “In other words, while there are customers for whom the choice between the MacBook and the MacBook Pro is an obvious one, there is always going to be a group of people whose needs fall squarely between the two and who have to decide between saving money or getting more performance and features.” A smaller, lighter model might be perfect for them.

Wired has a colorful article by Charlie Sorrell up entitled “Apple Quietly Kills FireWire 400.” Despite it’s intro, in which a masked hitman kills Mr. FireWire on the Apple campus, the piece winds up downplaying the move:

The internet is afire with complaints, but it’s probably fair to say that FireWire is now a minority interface. If you need it, buy a Pro and an ExpressCard adapter and quit whining. For everyone else, there is USB. With Apple, every technology has a limited lifespan. There’s a long list of things that Macs have dropped, and while there were complaints at the time, some of these things now seem rather quaint: the floppy disk and the modem. Heck, the MacBook Air doesn’t even have an optical drive.

Mac Daily News takes some swipes at the Wired article — mostly critiquing its headline — and sticks up for Apple, but even it has to wonder:

We’re still trying to figure out how Apple, among other concerns, plans to resolve the dichotomy between MacBooks that ship with iMovie and the lack of a FireWire port for DV cameras; the few relatively expensive solutions we’ve found so far (USB to FireWire DV Adapter) are all Windows-only. Surely Apple doesn’t expect hundreds of thousands of potential MacBook buyers who also own cameras equipped with FireWire to go buy new USB 2 cameras, right? Some other solution must exist or be in the works, right, Apple?

To complain to Apple about the removal of FireWire from MacBooks click here.